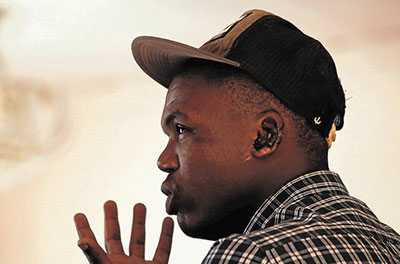 The hate crime trial of two men accused of brutally beating and shooting a 23-year-old gay man in Cape Town failed to get off the ground as scheduled today.

In April, Lunga Woko was attacked by a group of men at a petrol station in Luzuko, Phillipi East, when walking home with his friends.

The attack started with the men shouting gay slurs from their car. Woko recounted how the group of young men got out of their car and asked him why he is a “moffie”.

“These guys were sticking out of the windows [of their car], calling me gay, istabane, imoffie because I was wearing my shorts, but I ignored them and we kept walking,” Woko told Times Live at the time.

“They… started asking me questions like why I’m a moffie, but I wouldn’t answer them. The next thing one of the guys slapped me and another attacked me with an iron rod, while the others gathered half bricks.”

They proceeded to assault Woko to the point where he lost consciousness. The men also fired a gun at him, resulting in part of his ear being shot off.

During the attack, his assailants reportedly uncovered his genitals to determine whether he was circumcised.

“Lunga was targeted for this attack because he is gay,” said Ingrid Lynch from Triangle Project, who labelled the assault a hate crime.

The organisation held a protest outside the Phillipi Magistrates’ Court this morning in solidarity with Woko.

The trial, however, was unable to proceed because the suspects’ lawyer failed to arrive at court. The magistrate postponed the matter to December 10.

The two accused, Manuel Masande and Sinethemba Sithetho, are out on bail. 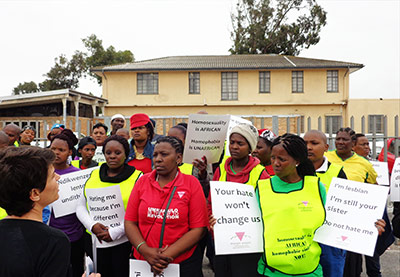 Lynch expressed her frustration at the turn of events and said that these kinds of delays, which have become increasingly common in court cases, are a form of “secondary victimisation” of the victims.

“They constantly need to be in court and this disrupts their lives, these unnecessary postponements; often because the defence is not in court,” she told Mambaonline.com.

Lynch also revealed that two other suspects, one of whom was the driver and the alleged shooter in the attack, have still not been arrested.

“The police do have their contact details and have their addresses, and they have been sighted in the community. There doesn’t seem to be any reason why they haven’t been arrested,” she commented.

Despite the delay, Triangle Project continued with its protest action. Ward Councillor Xolile Gwangxu addressed the more than 30-strong crowd about the rights of all South Africans being respected.

“The Constitution is very clear – you are a citizen and you have a right to be who you are,” he said.

The organisation has “called for the motive of hate to be recognised by the criminal justice system in the investigation, prosecution and sentencing of this case, so as to send a clear message that hate crimes will be met with the full force of the law.”