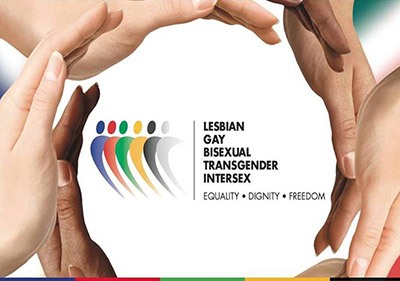 Africa’s first-ever government campaign in support of LGBTI equality was unveiled in Johannesburg on Tuesday.

The event was led by the Minister of Justice and Constitutional Development, Jeff Radebe, along with his Deputy, John Jeffery.

The programme aims to address the upsurge in hate crimes against members of the LGBTI community that have shocked the country in recent years and represents the first visible results of work by the National Task Team on Gender and Sexual Orientation-Based Violence against LGBTI Persons.

The task team was first announced in 2011 but was beset by numerous problems in getting off the ground. It’s only been in the last year that both government, primarily through the Department of Justice and Constitutional Development (DOJ&CD), and LGBTI rights groups have succeeded in creating a functional entity.

The event saw the launch of five elements that form part of the LGBTI programme. 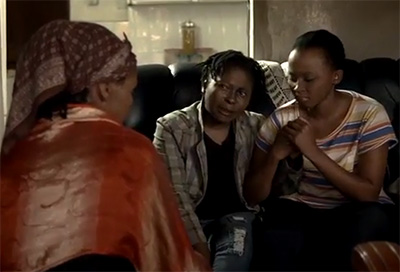 A PSA video campaigning against hate crimes was launched

1) A television public service announcement (PSA). It depicts a lesbian couple who are shattered after one of the women is attacked in a hate crime. The victim is urged to report the incident and they celebrate the attacker’s conviction in court. The PSA asserts that LGBTI people are entitled to live their lives free of prejudice and violence and urges victims to contact the authorities to report any incidents. Mambaonline was informed that the advert will be screened on SABC channels (watch it below).

2) The Terms of Reference for the Task Team. For the first time, the team has outlined what its aims are, how it will achieve these and who the involved parties and stakeholders are. The terms of reference provide the basis on which the task team will do its work.

3) The Terms of Reference for a Rapid Response Team to monitor and fast track pending and reported LGBTI related cases in the criminal justice system. This explains the processes involved in ensuring that LGBTI hate crimes are reported and are swiftly dealt with by the police and the courts – including the responsibilities of the departments of Health, Social Development and Correctional Services and the SAPS and National Prosecuting Authority.

4) A National Intervention Strategy for the LGBTI sector. This includes more details on the work that will be undertaken by the task team. The strategy’s focus is on a) LGBTI hate crime prevention programmes b) improving the response by the criminal justice system to LGBTI hate crimes and c) strengthening public service institutions dealing with LGBTI issues, including discrimination and hate crimes.

5) A pamphlet on frequently asked questions about sexual orientation and gender identity for individuals, families and communities. The pamphlet tackles questions such as: Can LGBTI persons be cured; Are gay men more likely to sexually abuse children; and, Are LGBTi persons un-African? The pamphlet also includes contact details of organisations that provide support and advice for LGBTI people.

Addressing the diverse audience, Minster Radebe said that “The equality clause in our Constitution remains one of the most progressive constitutional provisions in the world. We say this with pride because South Africa was the first country in the world to legally prohibit discrimination based on sexual orientation.” 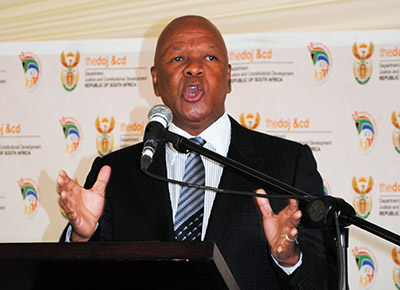 He acknowledged that despite this, “we have sadly witnessed acts of discrimination and violent attacks being perpetrated against LGBTI persons” but he insisted that discrimination that contravenes “human rights and fundamental freedoms will simply not be tolerated.”

Speaking earlier, Deputy Minister Jeffery said that “we are aware of the gap between constitutional rights and the reality of their implementation.” He added that “being gay is not a choice, but being homophobic is.”

Radebe went on to announce that the hate crime Rapid Response Team is now “fully operational” and that “there is progress being made in speeding up cases in the criminal justice system.”

He revealed that of the cases that have been reported to the team by LGBTI groups, 14 have now been finalised, five of which led to prison sentences of between 10 and 22 years. Nineteen cases are still pending in the criminal justice system while eight cannot be traced due to incomplete or incorrect information.

Radebe urged organisations to ensure that information provided to the task team is accurate and revealed that the SAPS will recall the dockets in these cases, as well as previously withdrawn cases, to ensure that they were correctly handled in the first place. “If not, we will refer them back to the investigating officers concerned for further investigation,” he said.

The Minister explained that the LGBTI programme is a three year one and will be funded by the DOJ&CD as well as by international donor agencies. He also spoke about pending hate crime and hate speech legislation that the government intends to introduce in Parliament, noting that the next step is to open the process for public debate.

“Undoubtedly the debate will be a contentious one given the element of hate speech and the balance that needs to be achieved between freedom of speech and prohibiting hate speech,” he commented. 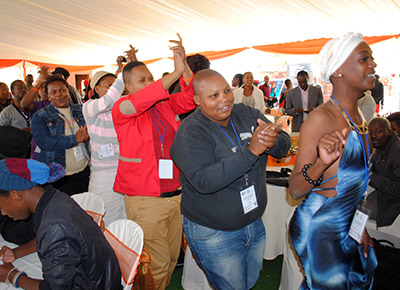 Radebe and Jeffery repeatedly described South Africa as “a world leader on LGBTI rights” internationally, trumpeting its role in introducing a historic 2011 resolution on violence against LGBTI people at the UN Human Rights Council. Both, however, failed to address the elephant in the room; the government’s feeble response to the growing wave of anti-gay legislation in Africa.

When Mambaonline asked Minister Radebe if the government’s and President’s Zuma’s silence on draconian laws introduced in Uganda and Nigeria do no not undermine the lofty ideals expressed at the launch, he responded unconvincingly that “we are a sovereign country and we do not dictate what other countries must do.”

He added: “What inspires us is our own history of fighting for freedom and fighting for justice and also ensuring that discrimination on any grounds has no future in our country.”

The programme and its launch are indeed historic and commendable. However, after years or fumbling the issue of hate crimes, questions linger about the implementation and impact of the programme. It’s now time that the documents, the strategies and the speeches bear fruit that we can all taste and rightfully savour.