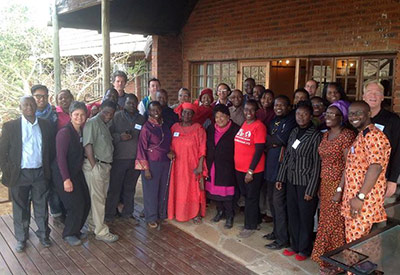 More than 30 African scholars, theologians, faith leaders, activists and students have issued a powerful declaration in support of LGBT equality on the continent.

The leaders from nine African countries gathered in Pietermaritzburg, KwaZulu Natal, South Africa, between 28 to 31 August.

They met for an “historic consultation on human sexuality, religion and equality,” wrote Dr Michael Adee, Director of the Global Faith & Justice Project.

The event was organised by Adee, who is also an elder in the US Presbyterian Church, and Kapya Kaoma, a Zambian Anglican priest, from Political Research Associates.

On the final day of the consultation, the group met to discuss the way forward which “included the drafting of a call to reflection and action for the African continent,” which was dubbed The KwaZulu Natal Declaration.

The declaration expresses deep concern for the ongoing oppression of LGBT people on the continent and calls for acceptance of and support for sexual minorities by African churches, African governments, African scholars and African people.

Homosexuality is illegal in 38 African countries. Those found guilty can face severe penalties, including in some cases life imprisonment and even the death penalty.

Below is the declaration in full.

We, African religious leaders, scholars, and members of civil society are highly concerned with the well-being of our beloved continent and with the demonization and criminalization of sexual minorities on the continent,

We, African religious leaders, scholars, and members of civil society met for a consultation in KwaZulu Natal on August 28-31, 2014, in response to the recent contentious debates regarding human sexuality on the continent. Recognizing that we are part of the global community, we met in South Africa, a country with a constitution that recognizes and protects the rights of sexual minorities,

Aware of the traditional leadership roles that academics, religious institutions, and churches in Africa have played in promoting social justice and human dignity,

Troubled by the misuse of religion to further marginalize and exclude sexual minorities from society and faith communities,

Noting the recommendations on human sexuality from the World Council of Churches 10th Assembly to the Central Committee, and the subsequent approval of the Terms of Reference for the Human Sexuality Reference Group to walk together in a pilgrimage of Justice and Peace from 2014-2021,

Observing the resolution on violence and other human rights violations based on real or perceived sexual orientation and gender identity in Africa issued in April 2014 by the African Commission on Human and People’s Rights,

Acknowledging the deaths and threats of death, the violence, discrimination, that sexual minorities, women, and children face on the continent,

We call on all religious institutions, especially Christian Churches

We call on all African scholars and academic institutions

We call on all our governments in Africa

We call on the international community and partners

We, African religious leaders, scholars, and members of Civil Society assembled in this KwaZulu Natal consultative gathering commit to uphold these recommendations. We also commit to share this vision with all partners and Africans across the continent and the diaspora and to be inclusive in our journey toward a better understanding and respect of the diversity of human sexuality through research, advocacy, publications and consultations.