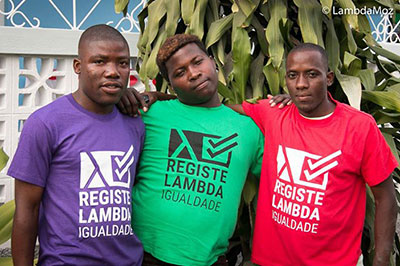 LAMBDA supporters at the launch of the “Register LAMBDA, Register Equality” campaign on Friday. (Pic: Facebook)

Mozambique’s only LGBT rights organisation has been struggling for more than seven years to be registered by the country’s government.

LAMBDA (Mozambican Association for the Defence of Sexual Minorities) has still not been officially recognised as an NGO, a process that normally takes a maximum of 40 days.

In 2010, after its requests were ignored by the Ministry of Justice for more than two years, the group took their case to the United Nations, appealing to the High Commission for Human Rights to act on the violation of their right to association.

During the UN Periodic Review of Mozambique three years ago, the UN Joint Sessions supported and called for “the registration of NGOs working on issues of sexual orientation and gender identity, in accordance with the principles of the UN Declaration on Human Rights Defenders.”

The UN also recommended “authorities speed up the process of legalisation of LAMBDA.”

However, the Ministry of Justice has remained silent, forcing Lambda into a position “that reflects that of the lives of LGBT citizens in the country: not legal, but not illegal,” said the group.

While the Minister of Justice has told the UN Human Rights Council that homosexuality is not an offence in Mozambique, the penal code still outlaws “practices against nature,” which could be used against LGBT people.

The campaign aims, said the group, to both apply pressure on the Mozambican government to formally recognise Lambda, while sensitising, educating, and informing public opinion concerning the equal rights of all Mozambicans, regardless of sexual orientation or identity.

“It is clear to LAMBDA that the government of Mozambique’s continued violation of its right to association is based on discriminatory attitudes towards homosexuality,” insisted the organisation.

The refusal to register LGBTI rights groups limits their ability to operate and raise funds, and is not uncommon in Africa.

In Botswana, LEGABIBO (Lesbians, Gays and Bisexuals of Botswana) has had to approach the courts in a bid to be registered. A ruling on the matter is expected later this month.

In Kenya, the Non-Governmental Organisations Coordination Board has also refused to register the National Gay and Lesbian Human Rights Commission (NGLHRC), saying that the group’s name is “unacceptable.”

In a rare victory in July, Kenya’s High Court handed down a judgement ordering the Coordination Board to register another organisation, Transgender Education and Advocacy (TEA).