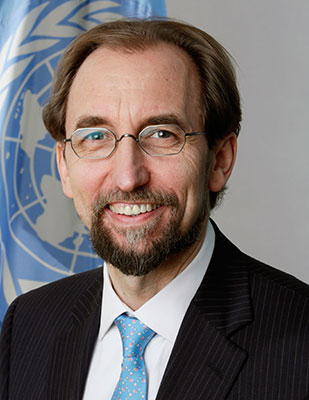 The UN High Commissioner for Human Rights, Zeid Ra’ad Al Hussein, on Thursday criticised a recent amendment to the Criminal Code of The Gambia that creates a broad and vague offence of “aggravated homosexuality” punishable by life imprisonment.

He also expressed alarm at reports of a wave of arbitrary arrests and detention of individuals perceived to be homosexual in The Gambia.

The amendment to the Criminal Code was approved by the National Assembly earlier this year and signed into law by the President on 9 October.

It targets, among others, so-called “serial offenders” (meaning individuals with a previous conviction for homosexuality), persons living with HIV, and consensual same-sex partners of persons with disabilities – all of whom could be imprisoned for life.

The new law replicates a section of the Ugandan Anti-Homosexuality Act denounced by the former High Commissioner for Human Rights, the UN Secretary-General and the African Commission Special Rapporteur on Human Rights Defenders.

“This law violates fundamental human rights – among them the right to privacy, to freedom from discrimination and freedom from arbitrary arrest and detention. It adds to the stigma and abuses that lesbian, gay, bisexual and transgender (LGBT) people already face in The Gambia,” High Commissioner Zeid said.

“Governments have a duty to protect people from prejudice, not to add to it. Public hostility towards gay and lesbian people can never justify violating their fundamental human rights. Instead, it requires increased measures to protect them against human rights violations. This has been reaffirmed by UN human rights mechanisms and the African Commission on Human and Peoples’ Rights,” he added.

Since the new law was approved, representatives of The Gambia’s National Intelligence Agency have been reportedly conducting door-to-door enquiries to identify, arrest and detain individuals believed to be homosexual, and some of those detained have allegedly also been subjected to violent attacks and mistreatment.

In other countries, similar laws have also led to an increase in violence against members of the LGBT community, including mob attacks.

“I call on The Gambia to fulfil its international obligations to promote and protect the human rights of all persons without discrimination, to repeal all provisions of the Criminal Code that criminalise relations between consenting adults and to put in place an immediate moratorium on arrests on the basis of such laws,” Zeid said.