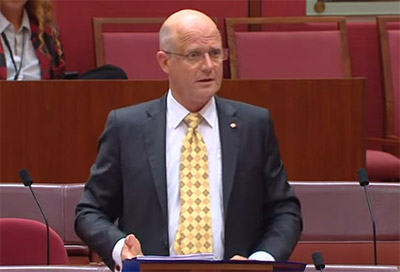 New proposed same-sex marriage legislation has been introduced in Australia’s Parliament in another bid for federal marriage equality.

The Freedom to Marry Bill was sponsored by Senator David Leyonhjelm, who introduced it on Wednesday.

He earlier told Parliament: “All my bill does is prevent the government from stopping two people from getting married on the grounds that they are not a man and a woman. It does nothing more, and it requires nothing more than tolerance.”

Somewhat controversially, the bill allows non-government civil or religious marriage registrars with an exemption so they do not have to marry same-sex couples.

Gay rights groups have called on Prime Minister Tony Abbott, who is opposed to marriage equality, to allow Coalition government MPs a conscience vote so that they do not have to vote along party or Coalition lines.

“Our lobbying gives us confidence there is majority support for a free vote in Coalition ranks, and now is the time for Coalition supporters of a free vote to speak out,” said Australian Marriage Equality Deputy Director, Ivan Hinton-Teoh.

“Australians want our country to rejoin the company of nations, like the UK, the US, Canada and New Zealand, that already allow same-sex couples to marry. It’s embarrassing that same-sex couples can marry in places like Utah and Oklahoma, but not Australia,” Hinton-Teoh said.

While Australia is often seen as a gay-friendly nation, gay and lesbian couples continue to be denied the right to marriage.

Efforts by individual Australian states to legalise same-sex marriage have been stymied by a 2004 amendment to the federal Marriage Act that defines marriage as being between a man and a woman, to the exclusion of all others.

Marriage equality is supported by the majority of the public, with 72% in favour of legalising gay marriage in Australia.