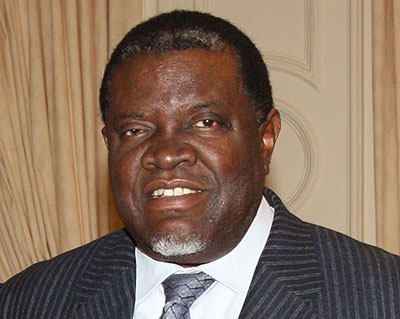 The President-elect of Namibia is said to be supportive of equal rights for gays and lesbians.

In last month’s elections, SWAPO’s Hage Geingob – who is currently prime minister – received almost 87 percent of the vote for the presidency.

Wikipedia notes that in his Ph.D. thesis Geingob “examined the efforts of Namibians to build a reconciled society…” and “to promote a culture of human rights…”

According to journalist Clemans Miyanicwe, the 73-year-old statesman, who will be sworn into office in March next year, is “a well-known defender of the rights of sexual minorities.”

In 1990, Geingob was reported to have said that although laws against sodomy were in place in Namibia, these had not been used “for the sake of human rights.” It’s also reported that he stated that gays and lesbians are protected under the Namibian Constitution.

Miyanicwe noted, however, that other members of Geingob’s SWAPO party have expressed much less support for LGBT equality.

The country’s LGBT community will also be relieved that the Democratic Christian Voice (CDV) party failed to secure any seats in Parliament in the recent elections. Its leader said that if it came to power it would put gay people in prison until they repent.

The Namibia Economic Freedom Fighters (NEFF) party, which flip-flopped on the issue of gay rights, also failed to win any seats. In June, NEFF founder Epafras Mukwiilongo said that homosexuality is “foreign” and an “evil practice” that is being imposed on Namibia by “imperialists.”

The party’s spokesperson, Comi Hiririka, then stated in October that, “NEFF is not against homosexuals. We have adopted a manifesto that will not discriminate.”

While consensual “sodomy” is illegal and could be used to prosecute gay men, this is not believed to have happened since the country’s independence in 1990.