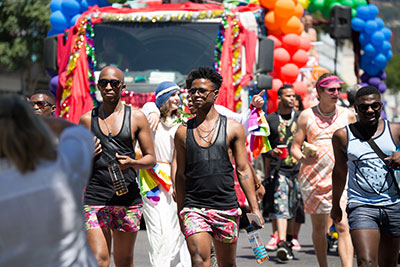 Hundreds of people paraded through Cape Town to celebrate their sexuality and gender identity on the weekend, despite a row about the event’s representativity.

Under the theme of ‘Return to the Rainbow’, the nine-day LGBTI festival culminated in Saturday’s annual parade, which, according to organisers, attracted approximately 2,500 people.

Festival director Matthew Van As said he was pleased with the turnout.

“The diversity within the parade and the after-party was amazing. It was much bigger and a much wider variety of people that turned up,” he told Mambaonline.

Van As stated, however, that he was unhappy with the way the Cape Times reported on the event and only published photos of white participants, suggesting that the newspaper was trying to depict the parade as racially exclusive.

“If you look at all the photos of the event you can see that white people were often in the minority. The Cape Times is playing dirty with us,” he said.

The Alternative Inclusive Pride group, which has been campaigning against what it says is a racial and socio-economic bias among the organisers, took part in the parade. The protesters made their views clear with placards and by sitting down and stopping the proceedings a number of times.

Van As accused the group of putting participants in danger through its actions. “They stopped the parade in its tracks, which is a problem because we were closing off roads. I think that’s putting people’s lives in jeopardy. It’s not the greatest idea.”

He also claimed that the group lied to him when he asked just before the parade kicked off if they were intending to disrupt the event. “They lied to my face. They could have let me know what they were planning for us to make sure it was a safe environment.”

While Van As said that the protesters numbered around 30 people, Funeka Soldaat, one of the people behind the Alternative Inclusive Pride group, claimed that up to 200 people in the parade had allied themselves to the protest. 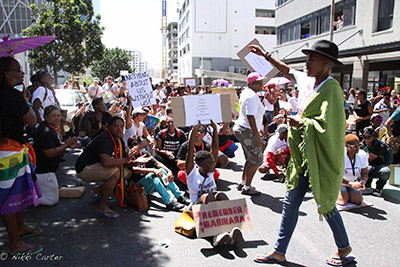 Soldaat told Mambaonline that the group’s actions aimed “to make it clear to people that Cape Town Pride is not inclusive, as the festival director is claiming.”

Soldaat demanded that Cape Town Pride hold an AGM this year so that the dispute could be resolved. “People have to be elected [to the committee]. The AGM will sort this thing out and there will never be a problem with Cape Town Pride again,” Soldaat said.

After the parade, the festivities continued with around 6,000 people celebrating in a street party in the city’s ‘gay village’. The bash went on into the night and featured a variety of performers and DJs.