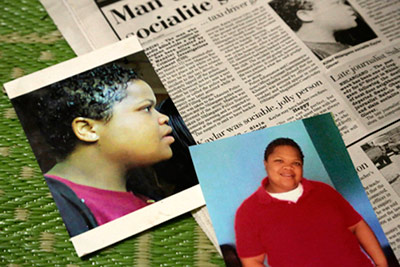 Kaylo Glover a young lesbian from Nhlangano, Swaziland, stepped into a bar with her friends on the early hours of Sunday morning. She was killed by an enraged man who did not want to be in the presence of lesbians.

He left the bar, fetched an axe from his car, returned and killed Kaylo. Kaylo was rushed to hospital and her killers followed them to the hospital and chased her friends with axe. Kaylo’s friend ran as she heard one of the guys shout “let’s finish off these dogs”. Neither the nurses nor the doctors could reach Kaylo in time, she bled to death.

This is the second LGBTI murder in Nhlangano. Just a few months ago, a gay man known as Themba was murdered.

Kaylo was 26-years-old. She was born and raised in Nhlangano. Proudly out and in a seven-month relationship, Kaylo was popular in her community. On the night that Kaylo went out to the night club in her town, she felt safe. She had always navigated the streets and was known for her kindness, warmth, and swag. Harassment did happen in Nhlangano but Kaylo often just shrugged off. On the night of March 15, her perpetrator was not going to have any lesbians socialising around him. He picked a fight, argued with them and later went to car to fetch an axe to finish off his utter expression of hate and anger.

When Kaylo’s mom spoke to Iranti-org, she was heartbroken. “I always walk with Kaylo, the guys always say horrible things and I tell her to ignore them. They killed her because she was a lesbian. She has never harmed anyone, or fought with anyone.”

The blank stares, the silence, the mourning and the state of shock is evident in the household. “It’s like I am dreaming, I keep thinking Kaylo will wake up and walk through this door,” says Kaylo’s girlfriend.

Iranti-org learned that in the previous month a gay man was murdered in Nhlangano.

“We don’t know what to make of these murders it is so disturbing and scary. Swaziland comprises mainly of traditional family structures, with extended families marked by a set of strong traditions and norms. Speaking about being lesbian, gay or transgender is very difficult and is often suppressed.

It is the usual silence of we know you exist, just don’t make a noise about it,” says Sane Mshengu, the director of Rock of Hope.

Swaziland is one of the world’s last remaining absolute monarchies where human rights are far off the radar and where freedom of expression or a critique of the monarchy or the judiciary can mean a prison sentence. In 2014, the editor of The Nation, Bheki Makhubu and human-rights lawyer Thulani Maseko were sentenced to jail for criticising the judiciary and the monarch.

It seems Kaylo’s death has broken the silence around hate crimes in Swaziland. It is bringing attention to the poor human-rights situation in this country, where the monarch is so incredibly rich and its citizens are poor and where LGBTI persons live hidden, framed as “the other”.

Rock of Hope is a beacon of activism in Swaziland, with its limited resources and volunteers, it seems that more support and attention needs to be made to Swaziland.

Swaziland is up for review at the UN Human Rights Council Universal Periodic Review. Rock of Hope, Iranti-org and Gender Dynamix along with other human-rights organisations will submit a shadow report on the human-rights situation in Swaziland.

As Kaylo’s family gather to try and make sense of this unnecessary act of hate that took her away, they believe that her identity as a lesbian must be remembered.

By Jabu Pereira, Director of Iranti-org, which documents human-rights violations and advocates for the rights of lesbians and transgender people in Africa. This article was first published by Thought Leader.