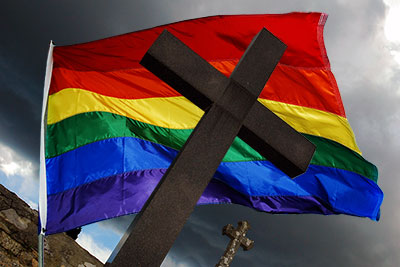 In a groundbreaking settlement the Equality Court in Cape Town has agreed that owners of a guesthouse cannot use their religious beliefs to turn away gay customers.

Neil Coulson and his husband Jonathan Sedgwick were denied accommodation in November 2013 by the House of Bread in the town of Wolseley, near Ceres, because their sexual orientation was in conflict with the owners’ Christian views.

The men, who are Christians themselves, wanted to be in the area to be near their son who was going to attend a school camp. They were humiliatingly told that the venue was “not gay friendly.”

The couple, assisted by the SA Human Rights Commission, took guesthouse owners Marina and Steph Neethling to the Equality Court which last year referred the matter to mediation.

This week the case was finally settled in the Equality Court, with the owners apologising for their actions and promising to not discriminate against LGBT people in future, failing which they will be in contempt of court.

Coulsen told Daily Maverick that he was grateful for the Constitution’s protection and praised “all those brave pioneers of the past who fought and died to make it possible for our voice to be heard.” He added: “Thank you for giving us a voice and giving us the tools to defend ourselves from indignity and unfair treatment.”

“Balancing the rights in our Bill of Rights will always be a challenge in South Africa, not only because of the extensive set of rights laid out in that document, but because of the rich diversity this country prides itself on,” said Matthew Clayton, Research, Advocacy and Policy Coordinator at Triangle.

“In this case though, Triangle Project believes that the Equality Court was able to cut through the arguments put forward by those claiming their freedom of religion was being infringed and instead see this as the naked discrimination it was.

“At a time when South Africa is once again seeing the devastating reality of hate and intolerance being exacted on foreign nationals around the country, this ruling is an important statement that no one has the right to discriminate against others because of who they are,” he said.

Clayton noted that the House of Bread guesthouse is a short drive from Ceres, where last year David Olyne, a young gay man, was brutally murdered by an attacker who told a group of young people to “come watch him kill a moffie.”

The issue of discrimination on the basis of religious beliefs has been in the media of late thanks to a number of wedding venues that have refused to serve same-sex couples because of their owners’ religious views.

The outcome of this week’s Equality Court case may yet have implications for those venue owners who insist that their religious “values” allow them to turn away gays and lesbians.

“Triangle Project applauds all those involved in bringing this matter to the Equality Court and hopes that more South Africans begin to realise they have no right to hate,” commented Clayton.