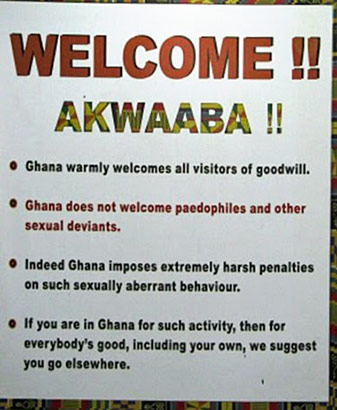 Visitors to Ghana are greeted with a welcome sign at Accra International Airport, which then warns “sexual deviants” to turn right around.

The words that follow become much more ominous, with the warning: “Ghana does not welcome paedophiles and other sexual deviants.

“Indeed Ghana imposes extremely harsh penalties on sexually abhorrent behaviour. If you are in Ghana for such activity, then for everybody’s good, including your own, we suggest you go elsewhere,” concludes the sign.

While the sign doesn’t explicitly mention homosexuality, it is seen as a sexual deviance under the law and is often lumped with paedophilia and bestiality.

Gay sex, described in the penal code as “Unnatural Carnal Knowledge”, is illegal in Ghana and carries a sentence of three years in prison. The country has been plagued by a series of vigilante mob attacks against LGBT people in recent years. In May 2014, it was reported that a group of youths killed a man they accused of being gay in Accra.

Robert Reid Drake, a queer-identified graduate from the University of North Carolina at Asheville, came across the sign when arriving at the country.

“I was well aware of Ghana’s anti-LGBT laws before arriving, but thinking about it in a classroom is something entirely different from being in a room, about to go on a month-long trip, and being directly confronted by it,” he said.