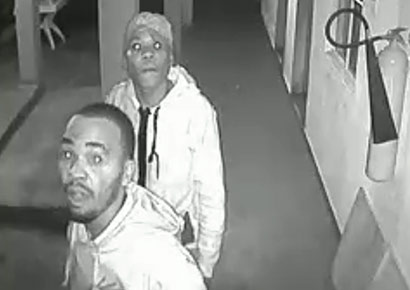 The suspects in the attack

Two men have murdered a security guard at the offices of one of the human rights groups that successfully challenged Uganda’s dreaded anti-homosexuality law.

Ugandan LGBTI activist Kasha Jacqueline Nabagesera revealed on Facebook that the offices of Human Rights Awareness and Promotion Forum (HRAPF) were broken into in the early hours of the morning.

She said that a security guard was beaten to death and organisational documents were stolen.

It’s not yet clear if the robbery and murder were related to the organisation’s work.

US-based activist Melanie Nathan, however, believes it could well be, noting that other groups in the country have also reported similar incidents.

“It seems that this is now becoming a trend, where NGO offices are broken into and not much is taken, causing observers to believe that such break-ins may be designed to intimidate the human rights organisations, some providing services and support for issues impacting LGBTI people,” she wrote on her blog.

In a joint statement, 10 Ugandan civil society groups condemned the suspicious attack. They noted that valuable items, such as laptops and other electronics, were left behind by the robbers.

“We are deeply concerned about the series of break-ins that have targeted civil society organisations lately,” commented Sheila Muwanga, Deputy Director of the Foundation for Human Rights Initiative.

“The Ugandan government should ensure that those responsible for the brutal murder of HRAFP’s guard and the burglary are found and held accountable, and take steps to end this pattern of break-ins,” she said.

Last month, unknown assailants attempted to break into the offices of Human Rights Network for Journalists-Uganda (HRNJ-U) after sedating their guard. The organisation had previously been broken into in June 2015, when robbers stole computers, valuable documents, cash and other property. Police investigations were inconclusive.

“It is of concern that assailants do not only look for valuable goods, but also steal confidential organisational documents. This indicates that the break-ins are not random, but target human rights organisations specifically,” said Nicholas Opiyo, Executive Director of Chapter Four.

HRAPF has released security camera footage of two men who are alleged to have committed the latest crimes.

The organisation was among those that successfully challenged the Anti-Homosexuality Act in Uganda’s Constitutional Court.

The court ruled in August 2014 that the law was null and void as there had not been enough lawmakers present when it was voted on in parliament.