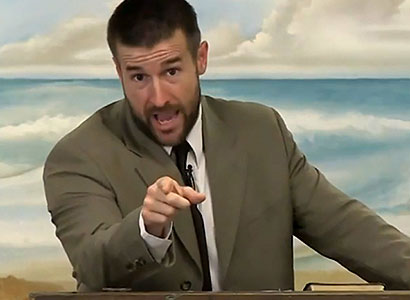 Anderson, who heads up Tempe’s Faithful Word Baptist Church, is set to visit Johannesburg in a missionary style evangelical excursion on 18 September to “win souls” for his hateful cause.

The vile proselytiser preaches that gay people should be executed and praised the Orlando massacre as “good news” because “there’s 50 less paedophiles in this world”.

As result of a campaign initiated by GaySA Radio Station Manager Hendrik Baird, the previous Johannesburg hotel and venues where he planned to preach refused to allow him to do so on their premises.

Anderson has still vowed to go ahead with his trip and has since tried to keep his new plans under wraps to avoid being further blocked and to avoid any protests.

In an e-mail, he asked his supporters “to not share these new locations publicly. We are not announcing them because we don’t want to have the same issues again. Also, please do not mention publicly or on social media that we have changed to a new location.”

Thanks to Baird, Mambaonline can, however, reveal the new details of the trip. It  kicks off when the preacher’s group arrives at OR Tambo on the morning of Saturday, September 17.

Anderson has urged his supporters to not attempt to meet or acknowledge him or anyone in the group at the airport. “The Sodomites are going to be there protesting and/or whatever else they have planned, so our goal is just to get out of there as quickly as possible without incident,” he said.

After settling in at the hotel, the evangelists plan to have lunch at the Ocean Basket in Kempton Park. On the Sunday, Breakfast is planned at Sugacube Cafe in Boksburg.

The group will then have its first round of “soul-winning” (knocking on people’s doors and preaching), followed by lunch at Burger Republic in Boksburg, and then another round of soul-winning.

At 6pm, Anderson plans an evening preaching service at Holiday Inn OR Tambo, where he also intends to stay for the trip.

On Monday, the American group will fly out to Gaborone for a week, where Anderson will start a Botswana branch of his church.

Baird has already contacted the venues and informed them of Anderson’s plans and the serious public relations consequences of allowing him to carry them out.

As a result, Holiday Inn has cancelled Anderson’s reservation and Ocean Basket has confirmed that it will not “permit Pastor Anderson to conduct public preaching or religious gatherings in its restaurants and prohibit him from entering any Ocean Basket restaurant”.

On its Facebook page, Sugacube Cafe announced that “we support our LGBTI community” so “join us by not allowing this preacher of hatred [to] spread his warped views of Christianity”.

In a Facebook post, a defiant Anderson revealed that “we are facing more opposition to our trip to South Africa and our work in Botswana than anything we have done”. He explained that this indicated the “amazing work for God that is going to be done”.

Anderson also slammed “lukewarm Christians” for “sympathising with perverts”, stating: “You make me sick and you make God sick!”

As for Baird’s efforts to have the Department of Home Affairs block Anderson from entering the country, there’s been little progress. A meeting promised by Minister Malusi Gigaba with LGBTI representatives and the SA Human Rights Commission (SAHRC) has still not materialised.

“GaySA Radio is very disappointed with the lack of action by Minister Gigaba,” Baird told Mambaonline. “He indicated that he would support our application at the SAHRC, but has subsequently – to our knowledge – not answered any correspondence from the SAHRC.”

“Time is running out and we are also waiting to hear from the SAHRC whether they will bring court action on behalf of all the complainants in this case,” Baird added.

He is, however, encouraged by the actions of the hotel and restaurants listed on Anderson’s new schedule. “This is no longer an LGBTI issue,” Baird said, “in our opinion South Africans are standing firm in their rejection of hate.”

Mambaonline spoke to Thabo Mokgola, Home Affairs Media Liaison Officer, who commented that, while a date was still being worked out, “the meeting with the LGBTI community and the human right commission will take place soon”.

You can sign the petitions against Anderson’s visit here and here.