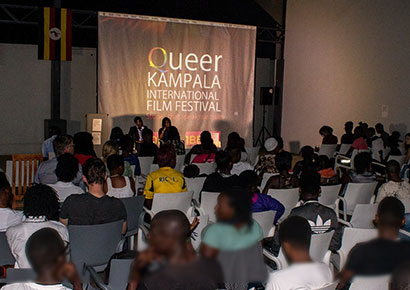 Early last month, the three-day LGBTIQ event was raided on the morning of its second day and forced to suspend the rest of the festival.

Somehow – despite efforts to keep the Kampala venue under wraps – the authorities were able to identify its location. Community members were warned by the organisers to stay away out of fear for their safety.

Last week, the festival announced that it had managed to successfully host the rescheduled screenings and debates on 28 and 29 December under a veil of secrecy.

In order to avoid being shut down again, the venue details were communicated privately and live updates and photos were not allowed during the event.

“We are not giving up,” a festival representative told Mambaonline ahead of the rescheduled festival.

The organisers later thanked the “brave festival participants who came out in force” to attend the event. “Together we made history,” they added.

“For those who did not make it to our screenings, we want to inform you that we are trying to negotiate with our 2017 filmmakers to extend the rights they gave us so that we can bring these education films to your communities as part of our monthly community film screenings.”

The festival said it also hopes to be able to screen some of the films on a new secure online viewing platform.

There was no legal justification for the police action, the organisers noted. “There is nothing illegal [about] watching educational films and organising a platform for debate about LGBT rights in Uganda.”

The raid followed the police crackdown against Pride Uganda in August when organisers and participants were threatened with arrest by the police, forcing its cancellation.

Colonial-era legislation criminalises gay sex in Uganda, allowing the courts to imprison anyone found guilty of the offence for life. This has been used by the government and the police to also illegally restrict LGBTIQ freedoms of expression, speech and association.