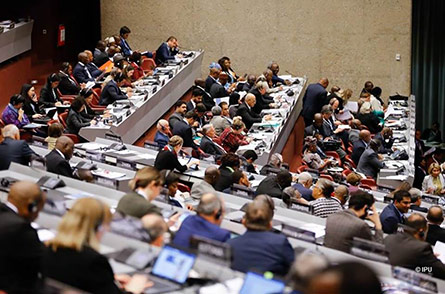 Openly gay MP Manny de Freitas recently participated in a gathering of parliamentarians from around the world in Geneva, where the topic of LGBTI rights caused a furore. Some delegates from the Middle East and Africa even threatened to walk out. He reports on the events that unfolded.

Between the 22nd and the 28th of March I had the privilege of attending the 138th Assembly of the Inter-Parliamentary Union (IPU) as part of the South African delegation.

The IPU is a unique organisation made up of national parliaments from around the world – basically the IPU is the United Nations of Parliaments. Currently the IPU has 178 Member Parliaments and 12 Associate Members. More than 6.5 billion of the world’s 7 billion people live in states whose parliaments are members of the IPU. One can thus understand the importance of the IPU in shaping policy and opinion worldwide.

In the 137th Assembly held in St Petersburg is Russia last year, the Committee on Democracy and Human Rights agreed to debate the following topic at the next assembly which was held in March at the IPU headquarters in Geneva, “The role of parliaments in ending discrimination based on sexual orientation and gender identity, and ensuring respect for the human rights of LGBTI persons”. The rules of the IPU state that committees may develop their programmes independently. Although there was opposition to this topic from many African and Arab countries, it was agreed that this topic would indeed be debated.

My colleague and fellow Member of Parliament, Mike Waters, who himself is openly gay, and I came prepared to participate in this important debate. This debate is particularly important considering the rampant homophobia that is still prevalent in many parts of the world. Many countries represented at the IPU consider it a crime to be gay which includes punishable offences including the death penalty. Our stance in the debate was going to be simple; that gay rights are a human right too.

When this session commenced a number of countries objected to the fact that this matter would be discussed at all. What then ensued was a debate on whether to debate this subject! South Africa, with a number of other countries, made the point that all that was being asked was to simply debate this issue, even if you are homophobic.

After over two hours of debate (which included vicious comments and attacks, hateful comments and outright lies), the matter was finally put to the vote, the outcome was 31 votes for debating this matter and 24 votes against. It was clear: the majority of countries present felt that this matter should be debated. However, because of time restrictions and the fact that all committees had to return to the General Assembly to report back to it, it was agreed that this matter be placed on the agenda of the next assembly later this year in Geneva.

When this matter came up in the General Assembly, the attacks were even more venomous. The Arab-speaking countries in particular simply refused to agree that this topic even be considered. This debate ran late into the night. 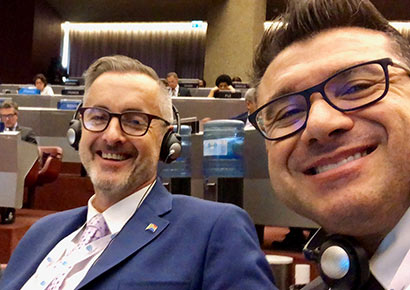 With translators ending their shifts, delegates needing to catch planes and the tension that was so thick one could cut it with a knife, the President of the IPU, (who is also the Speaker of the Parliament of Mexico), Gabriela Cuevas Barron tabled a proposal; that this matter would be placed on the agenda of the next Assembly as the very first item to be discussed (which was approved). She expressed her concern that this matter had the potential of splitting the IPU, an organisation that has existed since 1889.

One of the objectives of the IPU is to “protect and build global democracy through political dialogue and concrete action”. It is sad that some country representatives believe that certain topics are off-bounds and should never be discussed. With the support of countries such as Belgium and Australia, for example we will not stop this fight.

I am hopeful! Why? Because countries such as Angola, Benin and Botswana are standing with us in this fight – our own continent is starting to fight the centuries of homophobia which in some cultures is today encouraged and even expected.

We may have lost this battle but we will not stop fighting the war!