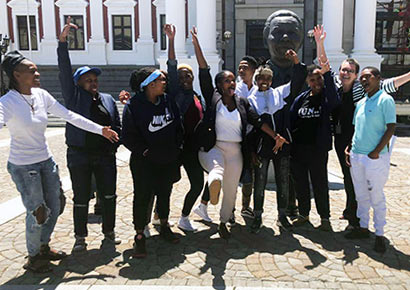 Carter and LGBTIQ activists celebrate the Bill’s adoption outside Parliament

In a victory for LGBTIQ equality and same-sex couples in South Africa, the Portfolio Committee on Home Affairs in Parliament has adopted the Civil Union Amendment Bill.

The move is a major step in the proposed legislation’s journey to becoming law. The Bill aims to remove Section 6 of the Civil Union Act which allows Home Affairs officials to refuse to marry same-sex couples on the grounds of their “conscience, religion [or] belief”.

The Private Member’s Bill was introduced by Cope MP Deidre Carter in January in response to increasing numbers of same-sex couples who were turned away from Home Affairs offices when they attempted to marry due to a lack of willing marriage officers.

In August, the Bill was deemed desirable by the Home Affairs Committee. After a second call for written submissions, there was also overwhelming support from the community at large.

On Wednesday, the committee unanimously approved Carter’s Bill, with some amendments. Two “transitional provision” clauses were added, allowing exemptions granted before the adoption of the Bill to remain in force, but only for a period of 24 months.

This means that current Home Affairs officials who were previously allowed to opt of out of marrying same-sex couples will be able to continue do so for two years. This was a compromise added to the Bill to address concerns by Home Affairs about implementation. Any new staff employed by the department, however, will no longer have the option to opt out of marrying same-sex couples.

All South Africans are entitled to equal public service delivery

“We had to do a compromise with the phasing-in clause so that it will be phased in over 24 months,” Carter told MambaOnline. “Not doing that compromise would have meant that it would have been delayed until next year and even after the elections.”

She added that it was important to note that, if passed, the Bill will compel the Minister of Home Affairs to ensure that during the two year transition period there is a marriage officer “available to solemnise a civil union at every Department of Home Affairs office.”

Carter said she felt “quite emotional” at “all the support that came in today, and the young people who were there.” She also praised the MPs in the committee. “It was so good to see the difference compared to 20 years ago where we are with respect to LGBTIQ communities. Even the older generation [on the committee] were the ones that said they were 100 percent in support, no discrimination.”

The Bill, which appears to be backed by most political parties, will now be sent to the National Assembly for debate. Carter believes that the Bill could still be passed and made law before the next election in May 2019.

The Legal Resources Centre and LGBTIQ activist Funeka Soldaat from Free Gender, who have actively campaigned for the removal of Section 6, applauded the committee’s adoption of the Bill.

“All members of the community are encouraged to join us in this historic moment. We celebrate the small victory of ensuring that all forms of marginalisation are removed from our laws,” said Soldaat. “We look forward to when all Home Affairs offices and marriage officials are able to officiate same-sex marriages without prejudice or favour.”

The groups thanked “all the members of the LGBTIQ community who shared their stories and experiences at Home Affairs during the implementation of this project.”

Igor Scheurkogel, who started a petition last year to amend the Civil Union Bill, also welcomed the news. “This is definitely a victory, not just for the LGBTIQ community but for the whole of South Africa, where equal public service delivery is promised to all South Africans,” he told MambaOnline.