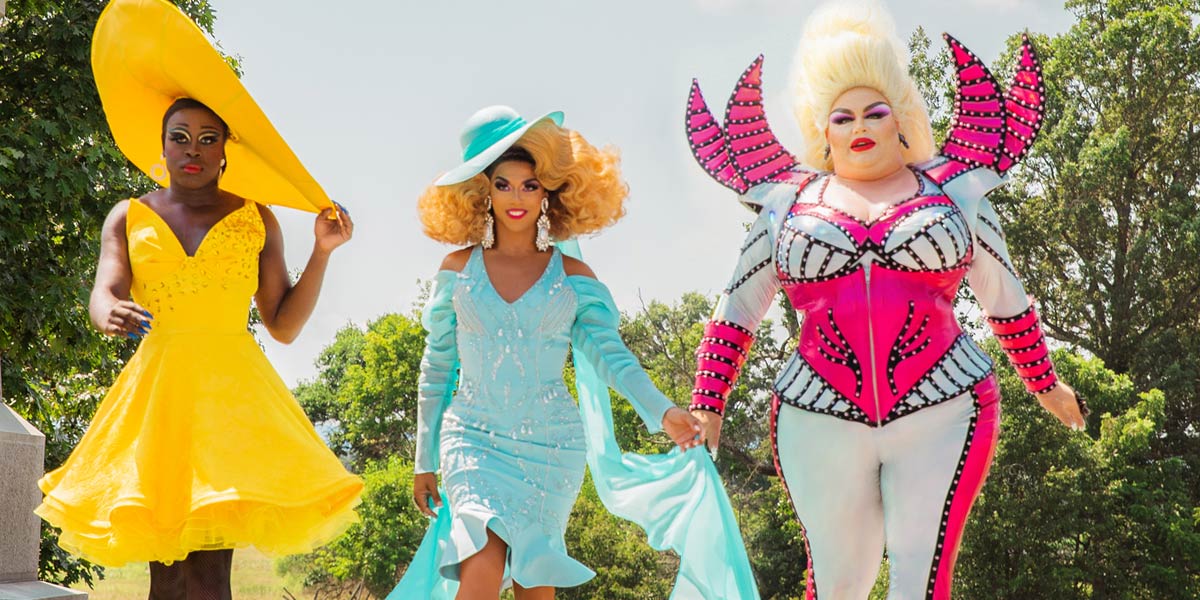 The Emmy-nominated drag reality show We’re Here is now streaming, gleaming and glamming up the screen in South Africa on Showmax.

The HBO show stars RuPaul’s Drag Race favourites and was recently nominated for a 2020 Emmy award for Outstanding Unstructured Reality Program. (It ultimately lost out to Cheer on the weekend.)

We’re Here has a 100% critics rating on Rotten Tomatoes, a score of 8.2/10 on IMDb and, thanks to the first season’s unprecedented success, was recently renewed for a second season.

Lauded as “genuinely moving” by The New York Times and “pitch-perfect” by Entertainment Weekly, the seven-part series sees renowned drag queens and RuPaul’s Drag Race alums Bob the Drag Queen, Eureka O’Hara and Shangela inspire small-town residents from across America to step outside their comfort zones for a night of no-holds-barred, full-on drag – and a life-changing journey of self-discovery.

To their “drag daughters” in each episode, the three offer a chance to be truly seen, to unveil their most beautiful selves, tell their stories, and above all, find acceptance. We’re Here is, as Shangela puts it, “a reflection of what love looks like – love beyond boundaries.”

Having grown up in rural towns themselves, the three know what it means to long for a community where you can truly belong as an LGBTQI+ person. “These stories are my stories; they are the shared human experience,” Bob told GLAAD. “It was emotional, because you see a reflection of yourself in a lot of these people.”

From Gettysburg to Farmington – we’re talking, as Bob puts it, “country as hell” – the three roll into town in their eye-popping tour vans (dubbed The Halleloo Express, The Purse-First Wagon, and The Elephant Queen on Wheels) to share their wisdom, their hard-won experience, and of course, their unstoppable fabulousness. Their mission? To help their protégées stage an unforgettable drag show, supported on stage by the hostesses themselves.

They’re flying the flag for self-expression and fostering acceptance within communities. After all, as Bob says, “It takes a village to make a queen.” As Salon.com observes, “On a deeper level, it’s a show about loving – truly loving – your neighbour.”

“All showmanship aside, We’re Here keeps the emotions real in its down-to-earth storytelling about queer and queer-friendly folks in the heartland, trying to connect with their families or just find a community,” says Washington LGBTQI+ magazine Metro Weekly.

“Sometimes you can change people’s minds and opinions just by them knowing a person from a different community than theirs,” says Shangela. “A lot of the places we went to were not very diverse. They were not racially diverse. They sure as heck weren’t gender-identity and sexuality-wise diverse. So it’s important for us to be out there and do that… It was a sobering reality and a re-introduction to what life is like in a lot of places in America – when we need to do better.”

We’re Here is already a one-of-a-kind, but what further sets it apart from other reality shows is that its stories aren’t manipulated from behind the scenes to up the ante and heighten fake drama. “There was no producing,” Eureka told Metro Weekly. “We just kind of let people tell their stories and tell their truth.”

From the first pitch, Eureka recalls, “The message was really just about showcasing people’s stories. We weren’t going to come in and just fix all their problems and put a nice big bow on the end. It was going to be real-life stories and give people a chance to start their journey, versus trying to fix it. That’s what I hate about some makeover shows — it’s just like, ‘Oh we’re going to come in and make you beautiful and now we fixed everything.’ But that’s not how life works.”

Announcing the series’ renewal recently, HBO Programming’s executive vice president, Nina Rosenstein, said, “We’re Here resonates in ways we had hoped for but couldn’t really have anticipated. The stories of our small-town drag daughters created an incredibly positive communal experience. We can’t wait for Bob, Shangela and Eureka to continue their journey helping others find their voice.”

Watch the We’re Here trailer below and the series on Showmax.