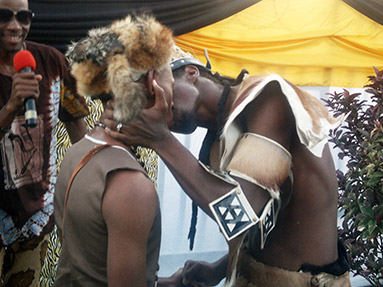 The Zulu Royal House has reportedly reacted with “shock” that a gay wedding was held in the town of Stanger, a historic location for the Zulu people.

On 6 April, Tshepo Cameron Modisane and Thoba Calvin Sithole were married in a wedding that combined their traditional African cultures in front of 200 guests in the town’s Siva Sungam community hall.

They were dressed in their respective traditional regalia. Modisane is Tswana, while Sithole is Zulu.

The event was covered by local and international media and has led to debate and controversy across South Africa on the ‘Africanness’ of homosexuality.

Stanger, also known as KwaDukuza, is the historic capital of the Zulus and is famous for being the place of Shaka’s assassination.

On Wednesday, the Daily Sun reported that the Zulu Royal House responded with “shock” at the news of the event and its location.

Spokesperson for King Goodwill Zwelithini, Prince Mbonisi Zulu, commented that “KwaDukuza is one of the respected places of the Zulus”.

He acknowledged that “we live in a democratic country” and that “the Zulu Kingdom can’t go against the country’s Constitution,” but, he added, “We don’t condone this thing of gays”.

Zulu also went on to say: “I’m sure even in God’s eyes homosexuality is not holy.”

Sithole, who accused traditional leaders of holding South Africa back, told Mambaonline that the couple didn’t have the wedding in his hometown of KwaDukuza to specifically make a statement or to prove a point.

“I had my wedding there because I am Zulu and proud of my culture and secondly I was born in township called Shakaville and, as you know, Shaka’s grave is also in my home town. I wore my Zulu regalia because I believe that me being gay doesn’t make me less of a Zulu man,” he said.

“Honestly, I feel sad that people still think that homosexuality is unAfrican. They still believe it a fashion statement and that it originated from Western countries, forgetting that homosexuality was there before King Shaka’s reign,” added Sithole.

As for homosexuality not being “holy,” he commented that the statement is “absurd, because if homosexuality is not holy, that means we Zulus are not holy too because the Bible is against ancestral beliefs.”

It’s not the first time the Zulu Royal House has made anti-gay comments. In January 2012, King Goodwill Zwelithini was reported to have said at an event commemorating the 133rd anniversary of the Battle of Isandwana that homosexuality did not exist in the past, and that it is “wrong”, “rotten” and “not acceptable”.

He later insisted that he had been mistranslated and misquoted by the media but the matter was never fully clarified.

Last year, the Congress of Traditional Leaders of South Africa (Contralesa) called for the removal of sexual orientation protection from the Constitution.

In 2006, it also opposed the legalisation of same-sex marriage in South Africa, claiming that “same-sex marriage is against nature, culture (all types of culture), religion and common sense, let alone decency”.

Modisane and Sithole have set up a blog about their wedding at sithole-modisane.blogspot.com.