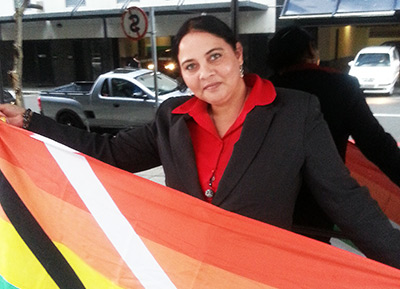 As gay men we are undeniably greatly impacted by our mothers. Regardless of how independent or successful we become we often never totally let go of our mother’s apron strings. So it is hardly a surprise that Mother’s Day is a big celebration in the gay community.

This is why it truly touched me to hear of a young gay Cape Town man who was attacked while buying Mother’s Day gifts.

Ameer Abbas set out in the early morning of Mother’s Day, Sunday 12 May, with his sister Shakeena to get a last minute gift to spoil their mother, Shireen. However, that wonderful sense of love and caring you get from buying a gift was brutally shattered by a savage attack.

It was Shireen who immediately took action to try and bring Ameer’s attacker to justice but, unfortunately, she was met with police indifference. Shireen contacted Cape Town Pride where Luiz De Laja referred her e-mail asking for help on to the Gay Flag of South Africa and myself.

The e-mail read: “My son is gay and was attacked 2 days ago and beaten badly while his attacker was shouting ‘you gay moffie remove your fez ( islam cap )’ . The attacker is also a Muslim! My son had no real help from police and they just treated it as a common assault and gave the attacker a R 150 fine!”

I immediately made contact and asked Shireen to take her case number and lodge a hate crimes complaint with the equality officer at her nearest magistrates’ court. She took time out from work and went to the Cape Town Central Magistrates’ Court but was referred to the Mitchell’s Plain Magistrates’ Court.

Later that day, Ameer’s stepfather was turned away from the Mitchell’s Plain Magistrates’, where officials refused to give him their names.

This is shocking, as this is the only route for those seeking justice against homophobic assault and discrimination, as relayed by Tlali Tladi, the previous spokesperson for the Task Team on Homophobic Violence.

Shireen, however, persisted and went again. She was referred to the High Court in Cape Town where she finally obtained the necessary papers to lodge a hate crime case.

I met Shireen recently and was deeply touched by this gutsy mom, who “gets it”.

Shireen describes Ameer as “My heart and soul. He has always been close to me since he lost his father and we had to be there for each other.” What impressed me most is that she does not want her son to be a victim but rather a survivor.

Shireen explained the events that led to Ameer’s gay-bashing.

“Living in Mitchell’s Plain our nearest shopping centre is the Promenade Mall and this is where Ameer and Shakina bought a watch for me. They then went to the town centre’s hawkers and started to browse the stalls for flowers and a gift bag.”

It was then that the older Mujaid George saw Ameer and apparently took offence to seeing this slight young gay man wearing a fez.

Mujaid started yelling insults at Ameer that he was a “moffie” and “had no right to wear the fez”. All of this in public. Ameer and Shakina ignored him and tried to finish their shopping for Mother’s Day.

Mujaid, however, persisted and followed them, all the while allegedly hurling insults. Eventually Ameer turned around and gave a Mujaid a gesture to make his feelings clear. Mujaid backed off and Ameer and his sister continued their shopping.

Then, Mujaid grabbed a surprised Ameer around the neck in a head lock before smacking him across the face so that Ameer fell to the floor.

Shireen added that: “Mujaid is three times Ameer’s size. Ameer is only 21 and still slim, where this guy is much older and much bigger. When Ameer fell he grazed his knee and arm badly. Mujaid then started punching Ameer on the chest to keep him on the ground and then started kicking him in the stomach repeatedly. Shakina then jumped on Mujaid’s back trying to get him to let go of her brother.”

Shireen explained: “When Ameer’s father died I had to be both mother and father for my children and I had to fight and protect them. I called Mujaid until he answered and I got him to come and confront me. He apologised, but I was not going to let it lie. I then took him to the police station to open a case of assault.”

According to Shireen, Mujaid George “gave himself up and was told by the police that he could leave whilst they filled out the docket and they would call him to come and pay his fine. They told us that it was a minor assault and they did not even cuff or detain my son’s attacker. Eventually he paid R150 and left”.

I asked her how Ameer is, and the concern on her face was evident.

“Ameer is keeping it all in. Whenever I bring it up he says Mommy I don’t want to speak about this. I am really worried. I don’t want him to one day ‘lose it’ and then do more damage to himself. We went through a lot of difficulties with Ameer and it took a long time for him to surface as gay. Now he’s got to be himself and to build himself up financially. I don’t want my son’s life to go down because of a gay basher.

“Ameer knows a lot of people in the community and he is afraid of being known as a gay-bashing victim and that the guy just got fined R150. So Ameer is a recluse, he refuses to go out with his sister and I am worried about him not living his life freely,” she said. 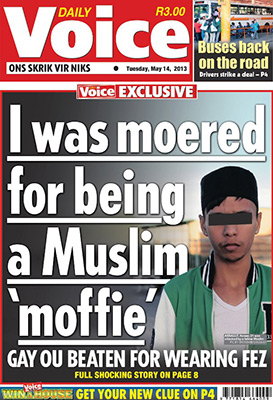 When asked how she and her family were doing, Shireen sighed deeply.

“Shakina is very affected by seeing her brother beaten. The whole family, from the young ones to the elders, all were there and saw how it upset us. I myself have lost days from work, where I just lay in bed… I have a nerve condition and have had to twice change my anxiety and sleep medication and still I can’t sleep.

“Just this weekend Mujaid’s son saw me in the mall and yelled insults at me. They can’t intimidate me but I am worried about Ameer and how he must feel going out in the community now,” she said.

I also asked Shireen what her plans are regarding the case and what she wants to achieve with it.

“Ameer is afraid and has been saying that he does not want to pursue the case with the high court. However I am allowed to take it further as a family member. And I am going to! What is our police service teaching the next person who attacks gay people or the next generation? What legacy is that leaving? That you can beat up a gay person and get off for a R 150?

“That does not sit right with me. I want my son to be who he wants to be and to walk freely without being put in danger…”

Since our meeting, I have reached out to a contact at the Department of Justice and the case will be put to the hopefully re-energised task team. We will follow up to see if we can get further assistance and notify Mambaonline readers.

We all want our mothers to be there for us when we need them the most. Shireen has shown true bravery, love and loyalty to her son. One can’t help but to add her to that long list of gay men’s ideal mothers – like Sophia Loren, Elizabeth Taylor and Debbie from Queer as Folk… If you ask me, I think that everybody wants a mother like Shireen.