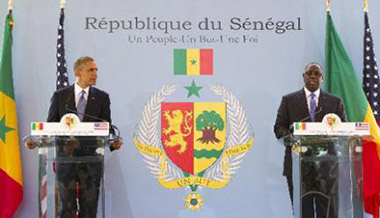 Presidents Obama and Sall on Thursday

Senegalese President Macky Sall and President Barack Obama exchanged words over the issue of LGBT rights during the American leader’s visit to the African country.

Obama has been criticised for not committing to address the issue of LGBT rights during his three-country visit to Africa, but on Thursday he publicly discussed the tricky issue at a joint press conference with Sall in Dakar.

The discussion ensued when Obama was asked by a reporter about Wednesday’s US Supreme Court ruling on same-sex marriage.

Obama responded that “the Supreme Court ruling yesterday was not simply a victory for the LGBT community, it’s a victory for American democracy”.

Obama went on to say: “Now, this topic did not come up in the conversation that I had with President Sall in a bilateral meeting. But let me just make a general statement. The issue of gays and lesbians, and how they’re treated, has come up and has been controversial in many parts of Africa.

“So I want the African people just to hear what I believe, and that is that every country, every group of people, every religion have different customs, different traditions. And when it comes to people’s personal views and their religious faith, et cetera, I think we have to respect the diversity of views that are there.

“But when it comes to how the state treats people, how the law treats people, I believe that everybody has to be treated equally. I don’t believe in discrimination of any sort. That’s my personal view. And I speak as somebody who obviously comes from a country in which there were times when people were not treated equally under the law, and we had to fight long and hard through a civil rights struggle to make sure that happens,” said the president.

“So my basic view is that regardless of race, regardless of religion, regardless of gender, regardless of sexual orientation, when it comes to how the law treats you, how the state treats you – the benefits, the rights and the responsibilities under the law – people should be treated equally. And that’s a principle that I think applies universally, and the good news is it’s an easy principle to remember.”

President Sall responded directly to Obama, saying: “These issues are all societal issues basically, and we cannot have a standard model which is applicable to all nations, all countries — you said it, we all have different cultures. We have different religions. We have different traditions. And even in countries where this has been decriminalised and homosexual marriage is allowed, people don’t share the same views.

“Senegal, as far as it is concerned, is a very tolerant country which does not discriminate in terms of inalienable rights of the human being. We don’t tell anybody that he will not be recruited because he is gay or he will not access a job because his sexual orientation is different. But we are still not ready to decriminalise homosexuality. I’ve already said it in the past, in our Cabinet meeting it is Senegal’s option, at least for the time being, while we have respect for the rights of homosexuals — but for the time being, we are still not ready to change the law,” said President Sall.

“But of course this does not mean that we are all homophobic. But the society has to absolve these issues. It has to take time to digest them, bringing pressure to bear upon them, on such issues. It is just like the capital punishment. In our country, we have abolished it for many years. In other countries, it is still the order of the day, because the situation in the country requires it. And we do respect the choice of each country. But please be assured that Senegal is a country of freedom and homosexuals are not being prosecuted, persecuted. But we must also show respect for the values and choices of the other Senegalese people.”

Despite President Sall’s assurances that Senegal is a tolerant country and that gay people are not discriminated against, consensual sex between members of the same sex is illegal, with penalties of between one and five years imprisonment.

Ndeye Kebe, president of Senegalese human rights organisation Women’s Smile, told the Associated Press: “I know of around a dozen people who are in prison for homosexuality as we speak. There wasn’t any real proof against them, but they were found guilty and they are in prison.”