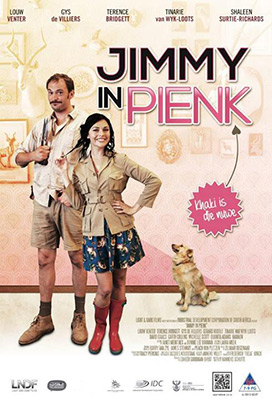 Being different has never felt so right in this passionate and heartfelt film. Jimmy in Pienk is a delightfully charming Afrikaans film that shows the true colours of the new South Africa.

It tells the funny and touching story of Jimmy Bester, a rugged seventh generation mielie farmer who can give an accurate five-day weather forecast by simply sniffing the wind. He lives out his creative impulses by shearing sheep on the neighbouring farms, something he has to hide from his father who believes that “men are not creative”.

When Jimmy’s father suddenly dies in a freak accident, he is confronted by two menacing (and comedic) loan sharks who come to collect what his father owes. When a distraught Jimmy discovers that his father had a twin brother, who was exiled from the farm for being gay and is now a multi-billionaire and hair product tycoon based in Cape Town, Jimmy gathers the courage to leave his home to seek help from his uncle Fred.

Fred’s desire for revenge on the family that spurned him sees him convincing Jimmy to enter his reality TV show, “SA’s Next Super Stylist”. If Jimmy wins the competition, he can take home the prize money and save his family.

Under the fabulous tutelage of Bunny, his gay hair guru, Jimmy sets out to master the art of hairdressing and becoming a metro-sexual man.

Jimmy in Pienk is written and directed by Hanneke Schutte, who was the South African winner of the Jameson First Shot competition with her short film Saving Norman (starring Willem Dafoe and which she directed in Los Angeles). She’s clearly headed for a successful career in filmmaking with her visual sensibility and the humorous social satire of Jimmy in Pienk.

Shaleen Surtie Richards narrates Jimmy in Pienk, representing the world Jimmy grew up in. She also personifies conservative aunties and elements in South Africa who might feel uncomfortable with the flamboyant antics of the over-the-top gay characters. She cunningly guides the audience’s journey into the gay lifestyle Jimmy encounters.

What further contributes to straightening out any homophobic animosity is Louw Venter’s outstanding performance as the ‘boer-verine’ who is plunged into an unfamiliar alien world; Venter’s natural response and interactions are comforting and show how important it is not to judge a book by its cover.

Terence Bridgett is as camp as a row of pink tents in the role of Bunny, an ambitious hairstylist who acts out all the gay stereotypes he’s ever been exposed to.

It’s impressive how Schutte grounds both Jimmy and Bunny, allowing their bromance to be an honest and heartfelt clash between worlds that results in a realisation of how important it is to embrace the differences that separate us.

Just as Jimmy poignantly shows Bunny the value of being true to oneself, so does Bunny allow us to realise that there is more to being gay than meets the eye.

Tinarie van Wyk Loots shines in the role of the impulsive, unconventional, free-spirited and quirky Rita, a militant PETA member and fruitarian who steals Jimmy’s heart. The chemistry between Venter and Van Wyk Loots is electrifying; it’s a tender romance that has its heart in the right place.

Equally brilliant is Gys de Villiers (as you have never seen him before) in the dual role of Jimmy’s rugged mielie farmer dad, and his gay uncle Fredrique, the owner of a South African hair empire (think Paul Mitchell). He’s very much a gay man trapped in a farmer’s body who longs for an uncomplicated life on the farm.

Fredrique’s partner Gigi, an uber chic, aloof and gay man who symbolises everything Fredrique is trying to escape from, is brought to life with style and flair by Gérard Rudolf.

The comic relief in Jimmy in Pienk is provided by two idiots from hell. There’s the superb David Isaacs as the loan shark Spanner; a part-time Hoover salesman and contract pet killer whose years of steroid abuse have left him with a serious case of ‘roid rage. 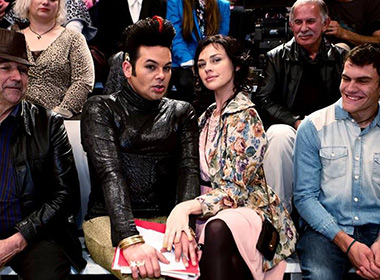 Garth Collins is equally brilliant as Spanner’s partner in crime; a muscled villain who lives out his military fantasies through paintball when he’s not napping.

Quanita Adams is also out of this world as the eccentric psychic Medea Moon, who’s passionate and larger than life.

In a South Africa where it’s vital to bridge the great divide between cultures, issues of sexual preferences, freedom of expression and the celebration of being true to who we are, Jimmy In Pienk succeeds triumphantly. We need South African films that not only create an awareness of how absurd the war zone between diverse cultures are, but make the most of celebrating our shared humanity.

Producer Zaheer Goodman-Bhyat explains that Jimmy in Pienk is “subversive in an interesting way. It’s a classic fish out of water tale that promotes the ideas of diversity and open mindedness by placing a conservative character in a situation where he must adapt and grow to survive. Of course, if that was the end of the story it would be dull. What’s special about this one is that it’s done in an entertaining way.”

And entertaining it is. Jimmy in Pienk is a proudly South African film proving that local is indeed lekker. Subtitled in English, it fittingly follows in the tradition of Afrikaans films like Roepman and Skoonheid, peeling away the layers of conservative fundamentalism under the foundation of our Rainbow Nation.

Viva Jimmy, the new khaki-wearing super-hero who deserves a medal for changing our world!