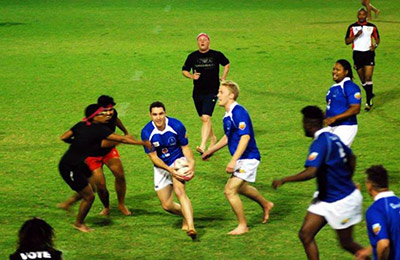 Wham! vs Wits All Stars (Pic by Sue Charlton)

On Wednesday, to tie in with Wits University’s Pride Week, the Wham! queer social rugby team – consisting of gay guys and girls of all shapes and sizes – played a friendly match against the Wits All Stars rugby social club on campus.

The theme of the match was ‘Tackling Prejudice’; an initiative to integrate the students, irrespective of sexuality, through one of our favourite national pastimes – a good ol game of rugger.

It was a balmy early Spring night and the floodlights, pumping music and excitement of queer rugby lovers testing their powers vs their straight counterparts was infectious. Soon they kicked off the match.

Immediately it was a blur of bodies scrambling for the ball and bringing their ‘A game…’ OK, there were a few screeches, yelps and a sprained limb or two, but generally Wham! held their own, even if a slim boy or girl was actually picked up and moved out of the way by the opposing team.

The camaraderie on the field was tight as the team kept up the momentum. Off the field, wall flower queers mixed, mingled and cheered.

The match played out to a respectable 26 – 24 score, with Wits All Stars winning the match. Player of the game was a Wham! Member, Nyx McLean (Captain of the team for Wits Pride). She truly brought the ‘gees’ and was there for every threat of a try. 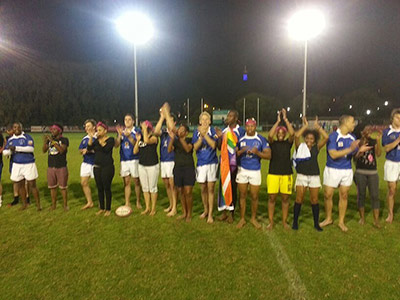 “The match had a feel good fun vibe and that made it worth it,” said Wham! organiser, Gabriel Hoosain Khan. “I’d like to acknowledge Wits Rugby in particular – they had a message at the end saying that they are moving to be more inclusive to LGBT people in sports,” he added.

When asked why Wham! was started, Khan replied: “The idea is that are many queer social spaces like bars but we wanted to create an alternative social space for queer people to have fun and be healthy and come together.

“We try and keep it quite diverse – not too boyish or girlish and everyone is welcome,” he said.

Wham! are hoping to find a new coach and would greatly appreciate your support. For future practice dates and matches contact Khan on Hoosain.Khan@wits.ac.za.