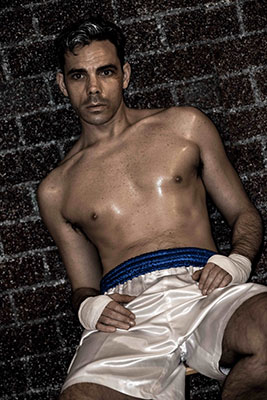 Marcel Meyer in One Arm

I’ll never forget my introduction to the wonderful words and works of Tennessee Williams. It was in the early 90s and it happened late one Sunday night in a Disa Park bachelor flat where Jan, my then-boyfriend and an out-of-work actor, stayed.

The film version of Williams’ The Night of the Iguana, starring Richard Burton, Ava Gardner and Deborah Kerr, was being screened on SABC and I had been invited to watch it on a very small portable TV with a built-in bunny aerial.

Despite the woes south-easter wind that night that rattled the crap out of the nasty 60s metal-framed windows, I remember being pleased that I had popped my Tennessee Williams cherry! I remember reading up about his work and I made a must-see list which included The Glass Menagerie, A Streetcar Named Desire, Cat on a Hot Tin Roof, Orpheus Descending and Suddenly, Last Summer.

Sadly Jan, the then-boyfriend, never made it to Hollywood but I’ll always be thankful for that date night in one of the Tampon Towers.

Anyway, fast-forward through two decades and numerous boyfriends and Williams’ works to September 2014. If you follow or have any interest in theatre, you would have noticed that award-winning director Fred Abrahamse seems to be concentrating much of his passionate efforts and highly-regarded expertise on staging the works of Williams.

Currently on stage and running until 14 September at the Artscape Arena is One Arm, and before that Cape Town theatre audiences were treated to Kingdom of Earth, The Milktrain Doesn’t Stop Here Anymore and Desire Under the Elms. All received rave reviews.

One Arm was written in 1942 and published as a limited edition that was sold under the counter in niche bookstores because it was considered “too hot” for the general public. It tells the story of an aspiring boxer (played by Marcel Meyer) who loses one arm in a car accident and turns to prostitution to survive.

The young hustler murders a client and is sentenced to death for his crime. On death-row, he connects with a young Lutheran minister (played by Nicholas Dallas) and their brief time together highlights themes of voyeurism, exhibitionism and paraphilia.

Explicit and daring, One Arm also gives an interesting and graphic account of the homosexual underworld in the 1940s.

If you enjoy hard-hitting entertainment, literature with a slight warp, onstage professionalism and passion, and, most importantly, brilliant locally-produced theatre, then hurry yourselves off to Artscape to see One Arm. Seriously, it’s worth it. So when is your next date night?

Ticket prices range from R100 to R150 and bookings can be made through Computicket or Artscape Dial-A-Seat.