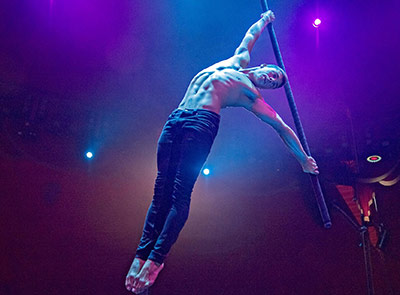 You know, without us gay boys this world we live in would just be rather dull and boring. Totally meh and bleh, in fact.

Case in point is the super-charming and super-talented Richard Griffin with his Madame Zingara’s Theatre of Dreams that, after 14 long months of planning, opened with a new dinner cirque production on Cape Town’s Grand Parade earlier this month.

The show is called The Celebration and is staged in the magnificent Queen of Flanders, a three-storey high, 650-seater mirrored palace-like tent with ridiculously opulent interiors. It’s the biggest of its kind in the world and has as part of the structure 6 tons of aluminium, 30 tons of galvanised steel, 70 000 floor screws and 5.2km of steel rods. There’s also 3200 mirrors, 1800m of velvet and 1200m of gold tassles as part of the interior.

The Celebration is rather aptly named because it was 15 years ago that Madame Zingara first opened her doors at the top of Loop Street in central Cape Town (yes, time flies when you’re having fun!) so there’s much to be merry about.

Griffin has again created a la-la land of glitz, camp, fantasy, opulence and extravagance, and he’s again taken dinner theatre to a new high. The excitement of the guests is obvious with much smiling, kiss-kissing, ching-chinging, chattering, posing, photo-taking, tweeting, Facebook posting and OMG-ing. 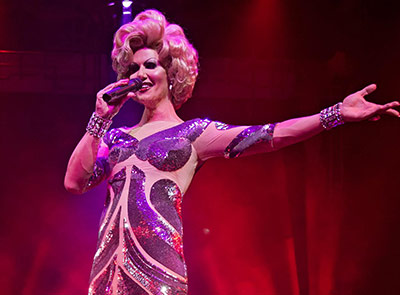 So you’re suitably impressed even before you’re escorted to your table by one of the many marching members of staff who are dressed in penguin suits – I kid you not – and before the gorgeous Cathy Specific struts out as MC and starts the show.

Ms Specific, with her signature 70’s-style blonde bouffant wig and outrageously glam frocks (she has eight in total), works the audience and the room; so if you’re seated front row, best beware!

From there on its sensory overload because if it’s not what you’re seeing and hearing on stage or suspended from the rafters that blows your mind, then it’s what you’re smelling and tasting from the four-course menu.

At this point I should mention that there’s a very delicious Spanish aerial pole artist with a very rippled torso and who wears very snug-fitting denim jeans. Also on the entertainment menu are the acrobatic Diablo Girls from China, a slick quick -change duo from South Africa, a Ukrainian hand balance and contortion trio, a Korean teeter board act, and the sensational singers, The Specifics.

The Celebration is an absolute must-see and must-do, and Madame Zingara can quite comfortably and confidently drop Cher’s famous “follow this, you bitches” line.

The Celebration runs in Cape Town until 26 September and in Johannesburg at Montecasino from 4 November to 31 December. Tickets range from R650 to R1250 per person and bookings can be made by emailing boxoffice@madamezingara.com or by calling 0861 623 263.