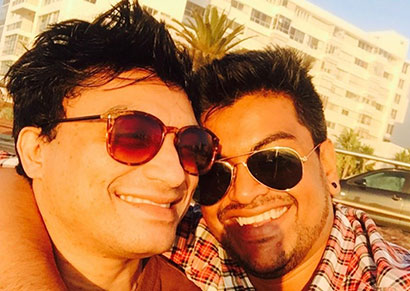 Naufal (right) recently married Riyaad, the love of his life

This has to be the most frank piece that I will ever write about being gay in the Indian culture; drawing truth from my own reality of living with homophobia in my family.

At the age of 35, I will no longer use adjectives such as painful, heartless and other dramatic descriptions to enunciate the feelings that one experiences being gay and bashed within the constructs of an Indian family.

In my early twenties, my sexual orientation was placed on the front page of Sunday’s most loved Indian newspaper, the ‘Sunday Times Extra.’ I was okay with that; I felt no fear or shame about my sexuality. The news spread like wildfire across my family, causing a number of them to rush out to purchase a copy of the paper to see for themselves the shame that I’d brought upon my parents.

There was immediate denial of my existence by most of them, some just laughed and others said I would change my mind at some stage. I still haven’t changed my mind. And it’s been almost a decade. Sorry folks! I’m still a raging Indian, Muslim/Hindu, queer. I belong to three minority identities that make up me.

While I still love my family, I feel their love has changed. I’ve given up on trying to show them that I am still the same person I was before I shared my attraction for men with them.

My family finally started speaking to me two years after my outing but there was nothing but an emptiness that to this day remains the same. I’ve not changed. I am still their provider, more than just financially, but I realized no matter how much money I throw at them I am no longer part of this family. I am as good as dead to them.

I’m not allowed to talk about my sexuality or talk about my #mancrush, or of someone potentially being my life partner. The television is quickly changed to another channel if any lesbian or gay content pops up.

The very word ‘gay’ struck fear that I would ‘turn’ my younger family queer at some stage. Yes, that backward train of thought that exists.

God forbid if Imran Vagar would appear on television! He would be blamed for some of my homosexuality. That’s how it is; I say ‘is’ as that’s still how the reality in most Indian homes.

I am not looking for pity here, I’m good; the one thing I do have is common sense. I will never in a million years be able to change perceptions in my closeted family, but I can tell you this much: I’ve changed where my love is directed – to me.

If you can identify with me in your Indian home and if you are shattered by emotional abuse that comes in tiny doses from your family, you can change your approach. Be fabulous and cut the cord. This is the best advice I can give you. You deserve more than the fake love that you know you are receiving.