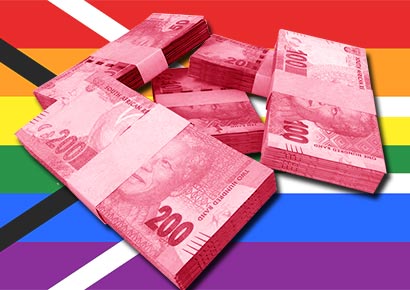 Tolerance is undisputed as a social value that signals society’s humanity, maturity and stability – but tolerance has a market value, too.

A striking instance of this is the significant spending power of the lesbian, gay, bisexual and transgender (LGBT) consumers – in societies tolerant enough to welcome them in their midst.

In South Africa’s case, there is sparse economic data, but researchers are confident that, based on international measures of LGBT household wealth and purchasing power, the Pink Rand packs a punch, underscoring the economic argument for tolerance and human rights.

This much emerges from accumulated research contained in a special report titled “We’re queer and we’re here!” – the latest monthly edition of Fast Facts from the Centre for Risk Analysis at the South African Institute of Race Relations (IRR).

But the cost is not confined to the human rights sphere, or only the LGBT community itself; given the significance of this community’s economic clout, there is a cost to the economy, too.

IRR analyst and author of the report, Gerbrandt van Heerden, notes that, given that “economic data about the South African LGBT market is either limited or out of date … the IRR looked at other countries which have compiled data on their respective LGBT markets”.

This research was illuminating.

The Pink Dollar, Van Heerden says, rivals the buying power of the African American, Hispanic and Asian communities in the US.

“Research by the University of Georgia’s Selig Centre for Economic Growth estimated the purchasing power of African-Americans to be valued at $1.2 trillion in 2015, while Hispanic buying power totalled $1.3 trillion and Asian buying power reached $825 billion.”

Van Heerden adds that while more in-depth research is needed to “uncover the true potential” of the South African LGBT market, “the point to take away is that the Pink Rand wields a potentially similar share of total buying power in South Africa”.

In a 2016 Huffington Post article, Van Heerden noted that The Other Foundation’s “Progressive Prudes” report estimated that 1.4% of South Africans identified either as homosexual, bisexual or gender non-conforming.

However, given the social stigma attached to homosexuality, the cultural or religious hostility in some communities, and the risks of abuse and violence in society, it was likely South Africa’s LGBT community was larger than surveys suggested, as a significant proportion of respondents could be unwilling to acknowledge their sexual orientation. Only 51% of black LGBT individuals are completely open about their sexuality.

Applying American research consultancy Gallup’s determination that 3.8% of Americans identified as lesbian, gay, bisexual or transgender to South Africa, Van Heerden said the IRR estimated that the Pink Rand could be 3.8% of GDP or R152 billion (around US $11 billion).

“If people in South Africa cannot be persuaded to be more tolerant towards the LGBT community on human rights grounds,” Van Heerden wrote, “then they should at least admit that it makes economic sense to empower this demographic.”

In this month’s report, he underlines this argument: “A progressive constitution and an education system that promotes the values of the constitution, among other things, can heighten the recognition of LGBT people and their social and economic contribution.”

Michael Morris is head of media at the IRR, a liberal think tank that promotes political and economic freedom.