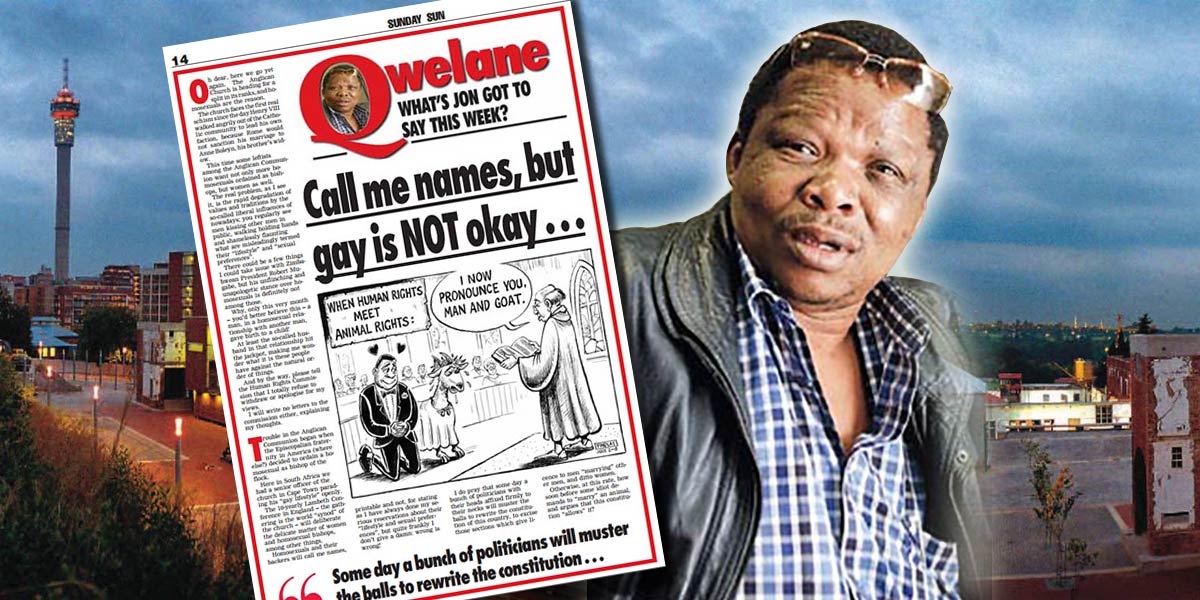 Last week the Constitutional Court, in a ground-breaking judgment, confirmed that a homophobic article written in 2008 by Jon Qwelane, the late journalist and South African ambassador to Uganda, constituted hate speech in terms of section 10(1) of the Prevention of Unfair Discrimination Act (PEPUDA).

Although the court found that section 10(1) was unconstitutional and invalid, it nevertheless held that Mr Qwelane was guilty of hate speech in terms of a reworked, constitutionally compliant, version of section 10(1). The judgment considerably narrows the scope of prohibited hate speech, while rejecting the libertarian view of freedom of expression embraced by the Supreme Court of Appeal (SCA) in its earlier Qwelane judgment.

Ever since PEPUDA came into force almost 20 years ago, different courts have interpreted and applied the prohibition on hate speech in section 10(1) of PEPUDA in markedly differently ways, creating much confusion and uncertainty. To add to the uncertainty, some courts suggested that section 10(1) was constitutional and invalid because it was overbroad and limited speech protected by section 16(1) of the South African Constitution. It is therefore a relief that the Constitutional Court, in its recent judgment in Qwelane v South African Human Rights Commission and Another, finally clarified matters, and that it did so in a way that seriously grapples with the impact of structural inequality on the intensity and nature of harm caused by specific types of speech.

Recall that, in its original form, section 10(1) of PEPUDA prohibited any person from publishing, propagating, advocating or communicating words that are based on prohibited grounds like race, sex, gender and sexual orientation, religion, belief and disability, against any other person, where the words could “reasonably be construed to demonstrate a clear intention (a) to be hurtful; (b) be harmful or to incite harm; (c) promote or propagate hatred.”

As some lower courts previously did, the SCA in its Qwelane judgment interpreted the underlined words above disjunctively (as if there was an “or” and not an “and” between each subsection) and found that section 10 established three distinct grounds on which hate speech could be based. Section 10(1) thus prohibited speech targeting a person based on their race, sex, gender, sexual orientation and other prohibited grounds that could reasonably be construed to be merely “hurtful” to that person – regardless of whether the speech was reasonably intended to be harmful or inciting harm, or to promote hatred against that group. The SCA then declared section 10 unconstitutional to the extent that it prohibited speech merely intended to be “hurtful”, and because it included speech based on grounds other than race, ethnicity, gender, religion or sexual orientation.

The Constitutional Court, in a unanimous judgment authored by Justice Steven Majiedt, held that section 10(1) must be read conjunctively, thus one must determine whether the words could reasonably be construed to demonstrate a clear intention to be hurtful AND to be harmful or to incite harm AND to promote or propagate hatred. It nevertheless found that section 10(1) was unconstitutional, both because the inclusion of “hurtful” unjustifiably limited the right to free expression in section 16(1) of the Constitution, and because the term was vague and, on a conjunctive reading, appeared “to be redundant” and thus superfluous. (I find the reasoning here confusing and muddled, as it is not clear how the inclusion of a phrase that that does not alter the meaning of the section could limit any of the rights in the Bill of Rights.)

The Constitutional Court gave parliament 24 months to fix the problem, but ordered that until that is done section 10(1) should read as follows: “… no person may publish, propagate, advocate or communicate words that are based on one or more of the prohibited grounds, against any person, that could reasonably be construed to demonstrate a clear intention to be harmful or to incite harm and to promote or propagate hatred.”

Not only does this interim definition excludes any mention of “hurtful” speech, it also requires the subsections to be read conjunctively. This means speech can only constitute hate speech if it targets individuals based on their race, sex, gender, sexual orientation or other prohibited grounds and could reasonably be construed as having the intention to be both harmful or to incite harm and to promote or propagate hatred. Read on its own, the courts’ reworked definition of hate speech does not depart radically from the various approaches taken by lower courts – including by the SCA. Moreover, like the SCA, the Court also endorsed the view that “the expression of unpopular or even offensive beliefs does not constitute hate speech”, and continued:

[E]xtreme detestation and vilification which risks provoking discriminatory activities against that group”. Expression will constitute hate speech when it seeks to violate the rights of another person or group of persons based on group identity. Hate speech does not serve to stifle ideology, belief or views. In a democratic, open and broad-minded society like ours, disturbing or even shocking views are tolerated as long as they do not infringe the rights of persons or groups of persons.

But despite these similarities, the Constitutional Court approached the problem of hate speech, and how to identify the kinds of speech-harm that could permissibly be regulated, in a radically different way than the SCA did. Specifically, the court acknowledged that words may impact differently on different groups who occupy different structural positions in society. Speech-harm will be particularly acute where the words “contribute towards creating or exacerbating systemic disadvantage and subordination”. The Court had previously recognized “the presence of deeply rooted structural subordination in relation to race” in our society. In Qwelane it extended this by acknowledging the existence of “structural subordination and vulnerability relating to sexual orientation and gender identity” as well.

This approach recognizes that objectionable or offensive speech is more likely to have an impermissible harmful impact on individuals from subordinated groups (in most contexts, this would be black people, women, LGBTQ+ people) than on individuals from socially privileged and dominant groups (in most contexts this would be white people, men, heterosexuals). The identity and status of the speaker and the individuals being targeted by the speech, the historical context and circumstances in which the speech occurred, and to what extent the speech perpetuates the structural subordination and vulnerability of the targeted group, are relevant factors to be considered when applying the section 10(1) test.

For example, and simplifying slightly, this approach suggests that when a white person targets black persons because of their race by using the “k” word and other racial slurs in order to humiliate and silence them and to assert the speakers imagined racial superiority, the intensity of the harm may be greater than when a black person targets white persons by referring to them as “Boers” and accusing them of “stealing the land”. This is because the latter speech is not likely to produce or reinforce the subordination of white people in society. Similarly, the intensity of the harm may be judged to be greater when a heterosexual targets gay men by calling us “moffies” and accusing us of paedophilia, than when a gay men calls a heterosexual man a “breeder”, or a patriarchal bigot. Of course, in all cases, the context in which words were spoken, the actual words used, and other relevant factors may also influence this assessment.

The reasoning employed by the court to justify its conclusion that Mr Qwelane was guilty of hate speech in terms of the revised text of section 10(1) of the Constitution provides further insight into the court’s approach. Noting that Mr Qwelane vilified the LGBT+ community as “animals”, and as less than human beings, and that he equated our sexuality with bestiality, the court concluded that the article unabashedly exuded his loathing and revulsion for LGBTQ+ people. But the court went further by recognizing that:

homophobic speech is part and parcel of the broader system of homophobia and transphobia in South African society which includes both hate speech and violent crimes perpetrated against members of the LGBT+ community. Homophobic speech is not only problematic because it injures the dignity of members of the LGBT+ community, but also because it contributes to an environment that serves to delegitimise their very existence and their right to be treated as equals. Hate speech regulation in our country ought in my view to be grounded in the express anti-racist and anti-sexist tenets of our Constitution. In this respect, our jurisprudence is unique because of its strong pronouncements on the transformative nature of the Constitution and its aim of eradicating the remnants of our colonial and apartheid past.

This passage (there are similar passages elsewhere in the judgment) makes clear that the court believed that the constitutionally permissible regulation of hate speech pro-actively protected subjugated individuals from the infringement of their right to equality and non-discrimination. When one lives in an environment that delegitimises your existence and your right to equal respect and concern, purely on the basis of your sexual orientation or gender identity (or on the basis of your race, sex, gender, or a combinations of these), you are likely to face informal discrimination and marginalisation in myriads of ways. But worse, LGBTQ+ people are also more likely to be assaulted and killed in this environment in which our lives are not equally valued and our right to exist is questioned. (Of course, the degree of likely harm will also depend on other factors such as your race, gender and class.)

I assume “libertarian” critics will not be happy with this judgment, not only because it confirms yet again that the right to freedom of speech is not absolute, but also because it acknowledges the ways in which racism, sexism and homophobia and the systems and structures of which they are a symptom, limit individual agency and disadvantages those on the wrong side of the structural divide. Individuals and religious organisations who contribute greatly to the creation of the environment that serves to delegitimise our existence, will probably also complain that the judgment limits their right to harm us.

But the Constitutional Court has spoken. The end.