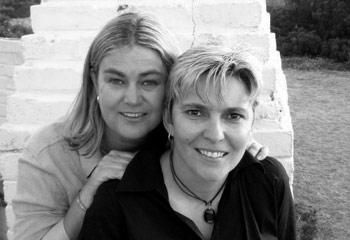 De Langa (right) and her wife Amanda on their wedding day.

A Facebook group has been set up to support a lesbian Cape Town minister who is being investigated by her Church after marrying her partner.

According to the group, when Ecclesia de Lange announced the news of her marriage to Amanda to her congregation she was charged by her Superintendent Minister for being in breach of the rules of the Methodist Church of Southern Africa (MCSA).

While the MCSA affirms the place of homosexual people in its membership, same-sex marriage is still a matter of debate in the Church and Methodist ministers are not allowed to conduct gay marriages.

De Lange was apparently married in a religious ceremony conducted by an ordained minister from another denomination.

She is now set to appear before a disciplinary hearing at the Edgemead Methodist Church today and her supporters have called for members of the LGBT community to visit her Facebook group and post words of encouragement.