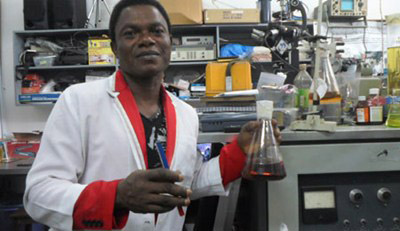 On track for the Nobel Science Prize: Chibuihem Amalaha (Pic: This Day)

Nigeria’s This Day has published an absurd article about a graduate university student who claims he’s “used science to prove that gay marriage is improper”.

The newspaper reports that University of Lagos post graduate student Chibuihem Amalaha has made “many discoveries and inventions” in science and technology. Now, he’s turning his efforts to the issue of gay marriage.

“In recent time I found that gay marriage, which is homosexuality and lesbianism, is eating deep into the fabric of our human nature all over the world and this was why nations of Sodom and Gomora were destroyed by God because they were into gay practice. That is, a man marrying another man and a woman marrying another woman,” says Amalaha.

He explains that “God gave me the wisdom to use science as a scientist to prove gay marriage wrong”.

Amalaha says that his ‘groundbreaking’ experiments have shown that the north and south poles of two magnets are attracted to each other while same poles repel each other.

His other high-school standard experiments include showing that negative ions are attracted to positive ones in the process of electrolysis. “That is what electrolysis is showing us, that gay marriage is wrong in the area of chemistry,” he states.

Despite massive evidence that homosexuality is all too common in nature, Amalaha further insists that biology also indicates that same-sex attraction is unnatural.

Amalaha claims that he’s the first person in the world to scientifically show that same-sex marriage is wrong, adding “In general, same sex marriage is evil. It should be stopped by those practicing it”.

Disturbingly, his “discoveries” have been backed by Dr. Henry Boyo at the Department of Physics at the University of Lagos. He said: “You can quote me anywhere, the guy’s concept is germane and it has been scientifically proven to be true.”

The uncritical and uninformed article is likely to add to the ignorance and prejudice surrounding homosexuality in Nigeria. Current legislation punishes homosexual acts with up to 14 years’ imprisonment, or death by stoning in northern regions of the country.

President Goodluck Jonathan has yet to sign a law passed in parliament in May that will jail anyone involved in same-sex marriage ceremonies (including the guests), anyone showing same-sex affection and anyone who does not turn in gay people to the authorities.

Amalaha plans to have his “work” published in international journals and is intent on winning the Nobel Prize in science. We wish him the best of luck.