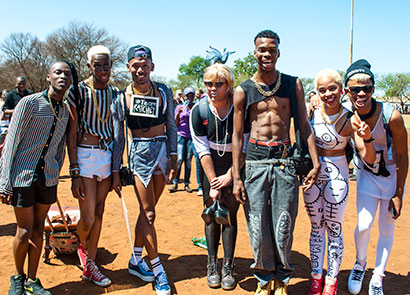 Some of the V.I.N.T.A.G.E dancers at Soweto Pride before Saturday’s attack.

A group of LGBT dancers became victims of a frightening homophobic mob attack in Johannesburg following their stage performance at Soweto Pride.

V.I.N.T.A.G.E, a popular eight-member dance troupe, were catching a minibus taxi at the Bree Street Taxi Rank at around 4.30pm on Saturday when they were heckled by men who they believe are taxi drivers.

“They were saying that they were irritated by gay people. They were asking why we always have to be like this and dress like this. They were laughing and joking among themselves and it turned into anger,” dancer and V.I.N.T.A.G.E media liaison officer Ashwin Bosman told Mambaonline.com.

He said that he believed that the incident was sparked by what they were wearing. “We were dressed crazy like we normally do. We don’t care what people think and sometimes people get irritated, but not like this.”

Bosman said that after the dancers got into a taxi, around 20 to 30 attackers surrounded and rocked the vehicle and forced open the windows from the outside.

“They poked at us through the windows. We had one girl, a friend, with us and they were grabbing at her. They were climbing onto the taxi and shaking it like they wanted to tip it over,” explained Bosman.

“At one moment I did fear for our lives. All our cell phones had died from Pride and I did feel like it would end there in the taxi,” he said.

The driver of their taxi tried to fend off the mob and was eventually able to drive off. None of the dancers were injured.

Ironically, the group have been collaborating with HIV youth awareness and prevention campaign loveLife this Pride season to combat gender-based violence and homophobia.

loveLife said that it was “disturbed” by the attack, and that it is “especially shocking” given that the Gauteng government is urging people to make use of public transport during October, National Transportation Month.

It called on the City of Johannesburg to secure spaces under its management; especially those used on a daily basis by thousands of people such as taxi ranks and bus stops.

“Violence based on race, sex and sexuality cannot be tolerated under any circumstances. Such acts of violence are unconstitutional and infringe upon one’s basic human rights. Failure to respond to this situation is as bad as condoning this violence,” said the organisation.

Last year, a young woman was sexually violated at Noord Street Taxi Rank because taxi drivers disapproved of the outfit she wore.