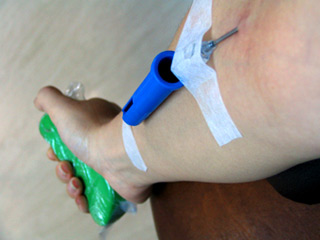 In a victory for fairness and equality, sexually active gay men are now finally allowed to donate blood in South Africa.

In the past, gay men or men who have sex with men (MSM) were seen as being at high risk of being infected with HIV and could only donate blood to the South African National Blood Service (SANBS) if they had been celibate for six months or longer.

The policy was widely criticised as discriminatory because, unlike in Western countries, the HIV epidemic in South Africa is a primarily heterosexual one. The policy was also perceived to unfairly target gay men while allowing heterosexual people who engaged in equally risky or casual sex to donate.

On Tuesday, Vanessa Raju, SANBS Communications Manager, confirmed to Mambaonline that a new non-discriminatory policy had been put in place that favours people in monogamous relationships, regardless of their sexuality.

“This policy would apply to me, for example, who’s just started dating someone new,” Raju added. “But people who are in monogamous male same-sex relationships [for more than six months] can now donate.”

She explained that the previous policy had been put in place on the basis of international statistics and trends. “It took us a while because we didn’t have local facts that warranted changing our policy, although we knew South Africa was different from other countries in terms of risk of HIV,” said Raju.

“The policy wasn’t meant to be discriminatory, but it was seen as such,” she admitted. “We then worked closely with the Department of Health and other organisations to reassess the situation.”

Johan Meyer, Health Manager at OUT Well-being in Pretoria, welcomed the news. “This change in the SANBS policy is wonderful and a breakthrough for the LGBTI sector. The previous policy was seen as discriminatory, although it was not meant to be.

“Now everyone, regardless of sexual orientation, is treated the same. It shows the value of good research, which can provide evidence for the basis of policy change,” he said.

Raju noted that June is Blood Donor Month, with June 14th being World Blood Donor Day. “In June our stocks traditionally take a plunge, so come and donate blood,” she urged.