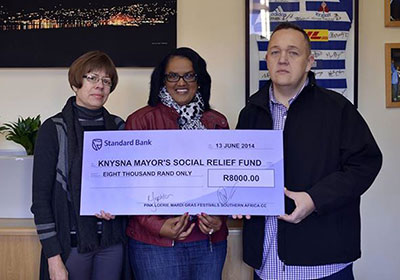 Organisers of the Globeflight Pink Loerie Mardi Gras & Arts Festival have handed over more than R20,000 to charities in Knysna.

The annual event, which took place in May, not only entertained and enlightened festival visitors to the Western Cape town but also hosted a number of fundraising functions.

Last week, those culminated in O’Neil handing over three cheques to grateful recipients: R5000 to the Knysna Animal Welfare Society, R9450 to the Loeriehof old age home, and R8000 to the Knysna Mayor’s Social Relief Fund.

“It’s about getting people together to celebrate life and celebrate freedom but it’s also about giving back to the community,” the festival’s John O’Neil earlier told Mambaonline.

The Pink Loerie Mardi Gras was created as a means to stimulate tourism in the town of Knysna during a traditionally quiet period of the year. In the past, the festival has come under fire from a minority of the town’s residents, led primarily by Christian groups.