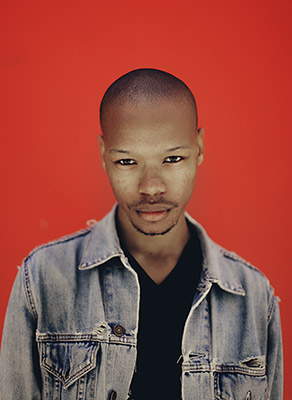 Nakhane Touré, the openly gay South African singer and songwriter, is a stunning new talent who’s been breaking musical and social boundaries over the last year.

He’s pulling no punches about who and what he is. The first track on the CD is titled Christopher, after his UK-born partner (who he met online), while the homoerotic video for Dark Room caused something of a stir in the country’s still conservative music industry.

Touré, who was born in the Eastern Cape and grew up in Port Elizabeth, lists Marvin Gaye, Fela Kuti, Radiohead, Miles Davis and Joni Mitchell among his influences. They’ll give you some idea of what to expect, but not what Touré actually does with them.

He spoke to Mambaonline about choosing to work as an openly gay artist, coming to terms with his identity and what drives his passion for music.

When did your singing and music take root?

Well, I grew up in a very musical family. Everyone sang, and everyone sang really well. If you can’t sing in my family, you’re sort of the leper and everyone makes fun of you. We are very cruel when it comes to that department, but in a jocular manner, I think. When I moved to Port Elizabeth I began playing instruments in school bands: trombone, steel drums, drums, piano, a little bit of marimba and whatever I could get my hands on. Those years were incredibly important in shaping who I have become musically, and actually who I have become as a human being. We used to try to get to school as early as possible so that we could practise, and we spent all our break times practising. We were even allowed to skip PT. Our lives were completely and utterly focused on music.

When did you become aware of the power of your voice?

My family repeatedly told me, and taught me songs that they sang in choirs. I tried to sing like them, and they encouraged me. So that was when I thought “Hold on. Maybe there’s something here.”

When did making music become something that you wanted to do for a living?

I made that decision at seven, after a solo on a Christmas carol evening.

Is it true that as recently as early last year you were on the verge of being homeless?

It’s true. God bless my friends for putting me up. I’m not fond of speaking about the reasons because they involve other people.

Has winning the Sama changed things for you?

I guess I’ve become slightly more recognisable to people who would have never known my music. I’m not sure though if that’s because I won a SAMA or because I performed. I’m not even sure if some of those people know my music, which is a bit of an anti-climax. It’s a nod, a badge, a golden star on your forehead. Really nice to have.

Why did you make the choice to be so open about being gay so early in your career when so many other artists, especially in SA, choose not do so?

I don’t have it in me to pretend to be someone else for the sake of a career or anything. My grandmother always said to me: “Don’t do things under the bed. At some point someone will find out.” I took that to heart. I also grew up in a family that, sometimes, discussed things openly, and I’ve always been brazen and headstrong. I saw no reason to hide.

How much do you think that being openly gay has defined the perception of you by the public and media?

Each article I read about me speaks about it. People have made it a “thing”. I never wanted to make it a “thing”. It was never a statement. It’s frustrating that for some people it comes before the music, but the work will always come first. I am much more than my sexuality. I don’t spend time thinking about it. Honestly, I spend time thinking about other, more important things that make up my personality, that make up Nakhane. But… I also understand why it seems important to some people.

Do you think that your sexuality gives you a different perspective on the world?

No. Why should it? How can it? I live in this world. I go through what other people go through. Me being attracted to men changes nothing in my perspective of life or love for that matter.

At what age did you first start questioning your sexuality?

I don’t know. My family always treated me differently to other boys. I have no idea why. I was handled a little delicately. I look back now and think that I was handled too delicately. I was the only child born into the family at that time, so people were always doting. I’m not sure if that’s too good for a child. I grew up thinking very highly of myself, which changed drastically as I became older and the world slapped me into consciousness. A rough guess would be mid to late primary school, or even early high school. Boys in bands, tours, hotel rooms, backstage glances, puberty. I don’t think I need to say more…

Did you have a moment or experience that you’d define as your coming out?

I came out to my friends and cousins first. I must have been around 17 or 18 at the time. My parents had gone to Port Elizabeth and I threw a little party. I switched off the music, and made what was apparently a not very surprising announcement. It was a sigh of relief until Monday when I became a little paranoid. I went to school and for an hour or so in the morning regretted it. That feeling passed and life was fine again. Coming out to my family was a little tricky. I was outed by an ex-girlfriend (whom I’m very good friends with now). That was an awful experience. I ended up back in the closet for a couple of years, and there was this flip flopping. I’m in and then I’m out, and repeat again.

It hasn’t changed my music. My music is mine, nobody decides what I do with it. But being in a relationship with Chris has shone a light on me. And sometimes that light is a little harsh and it shows every flaw I have. Sometimes it’s really soft and it frames things really beautifully.

Did you get any resistance to including homoerotic elements in the Dark Room video?

I love the label I’m under, Just Music. Where most labels would have thought that decision to be career suicide, I was encouraged. I have never been pushed to be more “socially acceptable” – whatever that means. It’s always been “Choose your own trajectory, and follow it faithfully.” I have a very small and close-knit circle, and those people understand who and what I am, and they are the only people I discuss my decisions with. So I don’t get much resistance from them. Sometimes a shaking of the head though…

There’s this theory that the recent wave of anti-gay laws on the continent are a reaction to Africa starting to come out the closet… being more open.

Is that because things were much more acceptable when they were happening quietly? Now people are choosing their own identities and are not ashamed of them, and so the powers that be don’t like that? Possibly. I’ve had that conversation with my uncle, the chief, plenty of times. The “we know it happens, but we don’t talk about it” mentality. 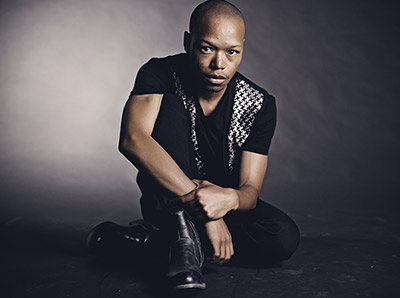 You’ve said that you’re “not that confused Christian boy any more.” What role has religion played in your life?

Faith has played a great role in my life in the sense that it has given me hope in times of frightening despair. Religion, mainly the people within it, has sometimes been a source of tremendous pain.

What leads you to make the music you do?

Input equals output. You want to be a writer, then read some books. You want to be a musician, then listen to a lot of music. It comes naturally. I think if I knew that there was a formula in order to get to a specific place I would jump on. Alas, there is none. If the song makes me feel something that I see as “good”, then it stays.

You’ve said that Brave Confusion is about the person you used to be and that you’re over it now. Who is the new Nakhane Touré?

People are always changing on some level, but at the core the real person is always there. My core will always be in the music. Maybe how I write the music, and what I write about might change. And the music must always be a testament to that change, otherwise I’m lying. In some corner, music is the pursuit of truth. I don’t know why or how, but I feel closest to the truth when I am touched by a song, a sound, a certain turn in a melody.

What impact do you want your music to have?

At first it was just for me and the friends who would spare a minute to listen. Until I had some sort of epiphany. What does art do for me? It makes me realise that I’m not alone in the world. Somebody, in a different country, from a vastly different background, or even generation feels or felt the same things as I have.

Are you happy with where life and music is taking you right now?

Sometimes. Depending on the day.