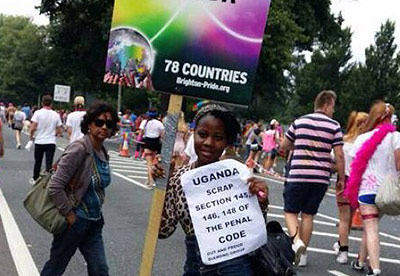 The UK is planning to deport a persecuted lesbian back to Uganda, where a harsh anti-LGBTI climate that could endanger her life awaits.

Activists worldwide have weighed in with letters and reports in support of openly lesbian Judith Twikirize, 23, in an attempt to save the young woman from deportation.

They have called for her release from detention and launched a campaign to raise funds for her renewed legal battle.

Within 72 hours, more than 1,600 people signed a petition, urging the UK Government not to deport Judith.

UK authorities have refused to believe that Twikirize is a lesbian, and that she was tortured because of her sexuality, despite the evidence of medical experts. They also doubt her activism, despite evidence of her participation in LGBTI campaigns.

Due to the fast-tracking of her case, her detention, marginal legal representation, and exacerbated post traumatic stress disorder, activists says that Twikirize has suffered prejudice to her rights and been restricted from accumulating sufficient evidence to satisfy authorities.

Twikirize was subjected to torture and physical assault in Uganda for being a lesbian. At age 10, because she was tomboyish, she was taken to a witch doctor by her grandmother to be exorcised. By cutting her deep with razors and forcing her to sleep in a house of spirits, the demons, it was determined by the family and witchdoctor, that ’cause lesbianism’ would leave. This went on weekly for a year.

After this she suffered other forms of persecution including a serious assault for being a lesbian. Twikirize’s account is supported by medical experts.

Twikirize, who has been in detention since September 2014, is now applying for a judicial review of her case with the Upper Tribunal. She has also supplied more evidence that she is a lesbian to the Home Office.

The UK has been repeatedly criticised for making it extraordinarily difficult for asylum seekers to convince officials that they are gay or lesbian.

A 2013 report revealed that a number of gay and lesbian asylum seekers in the UK had been forced to present “photographic and video evidence of highly personal sexual activity to caseworkers, presenting officers and the judiciary” to convince them of their sexuality.

The petition with links and updates can be found here.