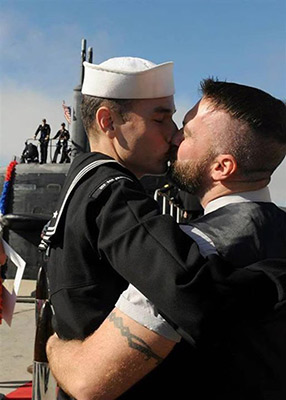 A San Diego sailor and his partner have become the US Navy’s first male same-sex couple to share a ceremonial homecoming “first kiss”.

Traditionally, a couple is selected for the kiss via a lottery aboard a ship when it returns from a long stint at sea.

They exchanged their kiss when the submarine warship USS San Francisco arrived at the Point Loma Naval Base after seven months at sea.

The returning ship was greeted at the docks by family and loved ones.

Sawicki said that he received much support from his shipmates when it was announced that he’d been selected for the honour, adding that the kiss wan’t that big of a deal.

“[It’s] like any other kiss. We love each other. That’s all that matters,” he said.

Brier commented that his biggest concern was that he’d embarrass himself by falling into the sea.

It’s astonishing to consider that just three-and-half years ago, Sawicki would have been thrown out of the navy for kissing another man in public.

Until September 2011, openly gay service members were barred from serving in the US military under the now repealed “Don’t Ask, Don’t Tell” policy.

The  president of the American Military Partner Association, Ashley Broadway-Mack ,told NBC that the happy smooch was a milestone.

“Although we still have progress to make, moments like these remind us just how far we’ve come,” he said.