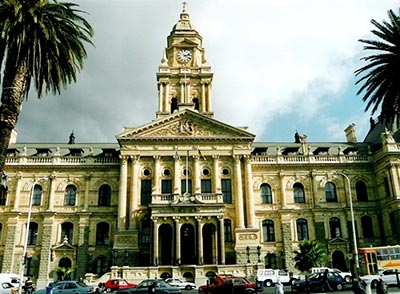 The Mr. Gay World Grand Finale has been moved from the Cape Town City Hall (above) to Knysna

Despite appearing to endorse the event last year, the City of Cape Town has backed out of supporting the upcoming Mr. Gay World™ (MGW) contest.

Local organisers of the international competition, which is expected to bring contestants and officials from more than 30 nations to the country, announced the surprising news on Thursday.

The week-long event was meant to be held in both Cape Town and Knysna from 26 April to 3 May 2015. This would include hosting the Grand Finale at the Cape Town City Hall, at which the winner was to be announced.

MGW 2015 producers, the Globeflight Pink Loerie Mardi Gras & Arts Festival™, have now confirmed that due to Cape Town’s lack of support, they have been forced to move the Grand Finale, the highlight of the contest, to Knysna.

The city’s decision is puzzling considering it presents itself as a global gay tourism capital. Councillor Garreth Bloor, who heads the Mayoral Committee on Tourism, Events and Economic Development, featured in the MGW official bid video, presented in Rome in August last year, and appeared to indicate the city’s support for the event then.

In the video, Bloor says: “President, directors and delegates of Mr. Gay World, we are keenly anticipating welcoming you to Mr. Gay World Cape Town and Knysna 2015, right here on our beautiful sunny shores.

MGW producers said they submitted the required paperwork and asked the city to assist with items including: financial support, a tour of landmarks, a meet and greet with the Executive Mayor and “access to anything that would promote Cape Town to the delegates, Directors and President of MGW.”

This has all been declined, said the organisers. The reasons behind the rejection are unclear and Mambaonline has e-mailed Bloor and the city’s media liaison requesting more information about the decision.

The organisers noted that, in an earlier sign of apparent disinterest in the event, representatives from Cape Town Tourism confirmed their attendance at a MGW media conference on Thursday 5 March but failed to arrive, without advising them.

“Support from the local host city government and tourism authorities is crucial for an international event like Mr. Gay World. In fact, it is a requirement,” explained a disappointed Coenie Kukkuk; MGW Director of Africa & Middle East and Managing Director of MGW 2015. 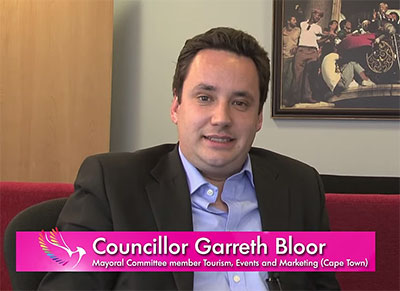 Kukkuk noted that past host cities’ officials and tourism authorities have always supported the event and have met with MGW representatives during their visit. In most cases, like in Manila and Oslo, officials have handed the keys of the city to the president of MGW.

He said that, as opposed to Cape Town, “Knysna’s authorities have shown their support to the producers and the event,” including a special welcoming function for the delegates hosted by Knysna’s Executive Mayor. The delegates will also march in the annual Pink Loerie parade on Saturday 2 May.

Kukkuk went on to comment that Cape Town has lost an opportunity to boost its reputation as a welcoming and gay-friendly tourism destination.

“There are visitors and delegates arriving from more than 30 countries. That in itself shows the reach of the event. And each will not only be spending at local businesses, but could become goodwill ambassadors. That cannot be put into monetary terms. Word of mouth is still the best tool to market a destination,” he added.

The President of MGW, Eric Butter, said from Sydney: “Mr. Gay World Mr. Gay World 2015fully supports the organisers in their decision to hold the Grand Finale in Knysna. We are very sad that such an amazing and unique city as Cape Town turned us down, but one door closes and another one opens and we are delighted to be coming to such a magical place like Knysna for our Grand Finale.”

The Mr. Gay World 2015 Grand Finale will now take place on Saturday 2 May, at the Conference & Exhibition Space, at the Knysna Mall at 8pm.

A number of planned events will still go ahead in Cape Town, such as a visit to Parliament (kindly facilitated by an out MP), as well as the MGW Farewell & After Party at Beaulah Bar on Sunday 3 May 2015, from 8pm.

South Africa is the first country to host MGW twice, after the successful Johannesburg 2012 outing. South African contestants won the contest in 2010 and 2011, and came second in 2012. The 2013 winner, New Zealander Chris Olwage, was born and raised in South Africa.

Update: The City of Cape Town has decided to support the Mr. Gay World 2015 event after all, blaming its apparent earlier refusal to do so on a technical glitch. Read more here.