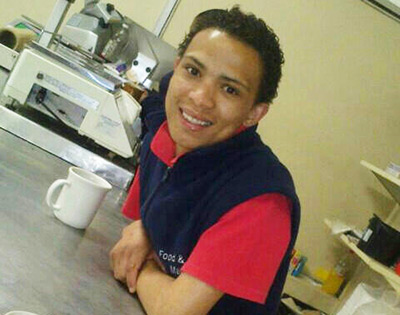 David Olyne was beaten, raped, jumped on and set on fire

An LGBT rights group is concerned about the state’s handling of the prosecution of the suspect in the horrific torture and murder of a young gay Ceres man last year.

Christo Oncker has been accused of allegedly beating a bound David Olyne, 23, with a rock, jumping on his face and then repeatedly setting him on fire as a group of teens watched on in March 2014. There were also claims that Olyne had been raped.

Oncker allegedly earlier called the youths to watch him “kill a moffie.” It was reported at the time that the teens later wandered off without reporting the incident, only telling a woman the next day after they returned to the scene to see if Olyne was still alive.

Last month, Oncker’s trial was postponed by the High Court in Ceres to allow him and his family to secure legal representation.

Triangle Project, which has been monitoring the Olyne investigation and Oncker’s trial, told Mambaonline on Monday that it is “concerned” about the approach taken by the state in order to secure a speedy resolution to the case, accusing it of “overlooking key issues.”

The group said that a troubling aspect of the state’s case is its focus on a single accused, despite evidence which points to more than one perpetrator.

“The state has taken a line that the group which was infamously summoned to come watch ‘me kill a moffie’ are completely innocent bystanders – a position that Triangle Project disputes,” explained Sharon Ludwig, the organisation’s Health and Support Services Manager.

Triangle believes that the prosecution is planning to call the six as witnesses for the state, despite the organisation’s protestations to the police and the Department of Justice that the young men should not be seen as helpless victims.

Ludwig also called out the police for still not having interviewed “some key witnesses to David’s murder” even though the organisation has informed the police that a witness, who is believed to have been at the scene at the time of the murder, is willing to give a statement.

According to Triangle, Oncker was offered a plea deal by the state, which he has refused. The trial is expected to resume in August in the Ceres High Court.