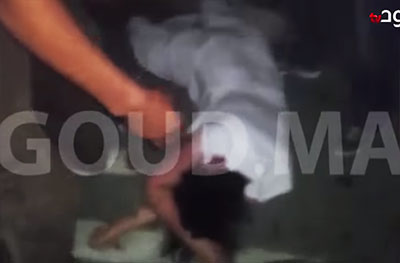 The victim was brutally beaten by the mob (see video below).

Morocco’s justice minister has been criticised for blaming the LGBT victim of a mob attack, accusing the man of “provoking” his assailants due to his appearance.

The victim, described by local media as a gay man, was brutally beaten on camera by a vicious mob on 29 June in the city of Fez.

It appears that the reason the man was assaulted was because he had a gender non-conforming appearance.

While Justice Minister Moustapha Ramid said the assailants should be prosecuted and two suspects are in custody, he has also made several anti-gay statements since the assault.

The organisation also slammed Ramid for calling on citizens to not “enforce the law themselves”, as though the victim had been breaking the law due to his appearance.

“What the person in charge of justice in Morocco should be announcing in the wake of this gay-bashing incident is a zero-tolerance policy toward such attacks,” said Sarah Leah Whitson, Middle East and North Africa director. “Instead, he goes around making statements that suggest that people perceived as gay are abnormal and share the blame for anti-gay violence.”

The victim told Human Rights Watch that the beating began when a taxi driver ejected him from the vehicle after a dispute, shouting repeatedly that he was a “khanit,” a local slur for a homosexual or effeminate man.

A crowd surrounded the man and pummelled him, knocking him to the ground as they continued their attack, a scene that was captured on cell phones and posted on Moroccan news websites.

In the video, the victim appears to have long hair and to be wearing a white robe.

“The taxi driver’s yelling caused this whole thing,” he said. “I didn’t invite this attack or deserve it. I’m like any other person.’’

A policeman aided by a few youths eventually extricated the victim, who was taken to a police station, where he remained until noon the following day. The police questioned him about the beating but filed no charges against him.

The police have arrested two 30-year-old suspects who are being charged with assault. They remain in custody and will appear in court again on 23 July.

A week after the Fez attack, Ramid declared that “homosexuality will not be allowed in Morocco, [otherwise he] would resign.” He also said that he “won’t take the responsibility for defending (homosexuality) before Allah,” the news website Alyaoum24.com reported.

Speaking about the Fez attack, the minister said, “We should not let people enforce the law themselves … but the persons involved should not provoke society, because society is like this.”

“The justice minister can’t have it both ways,” Whitson said. “He concedes that it’s a crime to assault someone based on his appearance but then insists that being gay is an abnormal condition that society rejects and should remain criminalised.”

Male and female same-sex sexual activity is illegal in Morocco, with penalties ranging from six months to three years in jail, as well as the imposition of fines.

According to the blog Erasing 76 Crimes, local activists have reported that 25 Moroccans have been arrested for homosexuality since February.