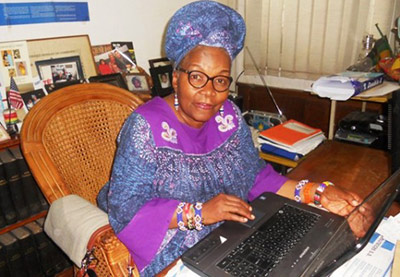 Attorney Alice Nkom is a defender of LGBTI people in Cameroon

There’s been a welcome drop in the number of prosecutions of gays and lesbians in Cameroon, regarded as one of the most homophobic countries in the world.

Erasing 76 Crimes reports that, according to the Cameroonian Foundation for AIDS (Camfaids), prosecutions for homosexuality in the capital Yaoundé decreased by 58 percent between 2012 and 2014.

During that same period, the number of LGBTI convictions also fell dramatically — from 16 to 4.

Similar drops have been reported in Douala, the country’s largest city.

Reasons suggested for the trend include improved advocacy by local and international human rights groups, and successful interventions by foreign embassies and LGBTI-friendly lawyers such as Michel Togué and Alice Nkom,

Same-sex sexual acts are illegal in Cameroon, with penalties of up to five years imprisonment.

Serge Douomong Yotta, Executive Director of Affirmative Action in Yaoundé, told the blog: “In 2015, everything suggests that we are heading in the right direction. Indeed, we hear less and less about incarceration. In some cases that I know of, the charges have been settled in the police station.”

Patience Mbeh, LGBTI Director at REDHAC, noted, however, that while things may gotten better in the cities, this may not be the case elsewhere in the country.

“To our knowledge several suspected homosexuals are languishing in prisons without legal representation in rural areas (including Edea, where we have evidence),” she said.

In February last year, it was reported that at least 20 people were in jail on homosexuality charges in Cameroon, with one awaiting trial for 16 months.