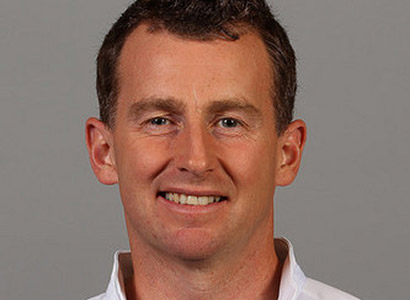 This weekend’s Rugby World Cup will break new ground in the traditionally macho sport when it’s for the first time refereed by an openly gay man.

Nigel Owens has been chosen to oversee the epic game between Australia and New Zealand in England on Saturday.

The 44-year-old Welshman came out as gay in 2007, revealing that he had attempted suicide in his twenties.

In an interview last year with Wales Online, republished this week, he said that coming out was not an easy decision to make at the time.

“I won’t lie, it was difficult. Difficult to accept who I was to start with and then the next stage was wondering how I would cope with the reaction and would I be able to carry on with refereeing when people knew I was gay,” he said.

Owens explained that the generally positive reaction to his coming out had affirmed his love for the sport. “Making a choice between being yourself and doing what you love is not a choice anybody should have to make. Thanks to rugby, I didn’t have to make that choice.”

He also spoke about overdosing on pills and whiskey at the age of 26 and being found unconscious on a mountainside, which saved his life.

“When I look back to those times I realise I am very lucky. I am one of the few people who have got through that situation. I don’t ever want to be in that place again,” Owens said.

“I realise how difficult it is for young people in similar situations, in sport or otherwise, and that is why I have no problem talking about it even though it is difficult. I know I can help other people come to terms with who they are.”

According to the official Rugby World Cup website, Owens was selected to referee the final because of his “experience and his consistency over many years, as well as his excellent form during the build-up to and during RWC 2015.”

After being notified of his appointment, Owens commented: “This is a huge honour and a privilege for me. I am humbled to have been chosen to referee the Rugby World Cup final.

“I want to thank my friends and family for their ongoing support and for helping me through some rough times in my life. My dad, in particular, is always there for me and is delighted with this news – it’s just a shame my mother is not here to see this as she was a pillar of strength for me. She passed away six years ago and I know she would have been very proud,” he said.