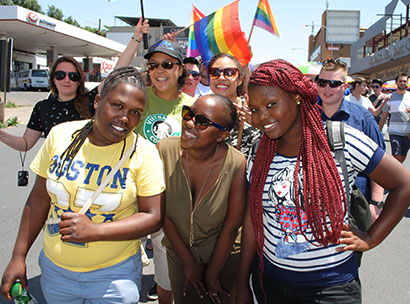 Between 4,000 and 5,000 people marched through Illovo on Saturday to mark the 26th annual Johannesburg Pride, Africa’s oldest LGBTI event.

The Pride was this year, for the first time, based at the sports field alongside the iconic Wanderers cricket stadium, within easy access of the M1 highway.

Hundreds streamed into the venue, which was lined with community group stalls and food vendors, throughout the morning.

Led by a double-decker bus, the parade kicked off at noon in scorching heat, with thousands marching for LGBTI equality, freedom and visibility under the theme of “#IAmWhoIAm.”

Dominated by rainbow flags and umbrellas, the procession wound its way down Corlett Drive and through Melrose Arch as passersby waved and motorists hooted in support.

The only visible opposition came from two religious protesters who called on marchers to “repent”.

While one man wielded a Bible, another held up a sign that read: “Jesus Christ… Your saviour? Your judge?” Some Pride participants responded by hugging the surprised men while others shouted back and another tried to obscure part of the sign.

The parade saw t-shirts and placards calling for general LGBTI acceptance and affirmation. Slogans included messages such as “Love has no labels”, “I am who I am”, “God loves you”, and “Proudly gay.”

HIV awareness was a major focus of both the parade and event as a whole, thanks to the group Health4Men and the WeTheBrave.co.za campaign.

The marchers returned to the Wanderers field and the festivities continued into the afternoon with live entertainment and DJs.

“We are finally taking Pride back to where it was before. The attendance was very good. We had wide support from the community in general,” said Johannesburg Pride Chairperson Kaye Ally. 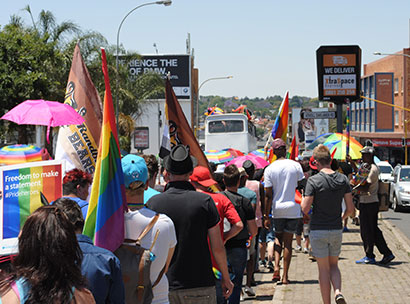 The proceedings were, however, marred later in the day when a group of around 150 people, who were initially stopped from entering the venue because they brought their own alcohol, forced their way through security onto the field.

Ally told Mambaonline that she had no choice but to allow the revellers in to avoid conflict or injury but insisted that it was a legal requirement that participants be barred from bringing alcohol into the venue.

“We need to communicate to the community that cooler boxes with alcohol are not allowed into events. They need to understand that this is not a Pride thing, it’s a restriction imposed by the authorities. It is illegal to bring alcohol into an event,” she said.

According to Ally, Johannesburg Pride 2015 was otherwise a safe and successful outing for the LGBTI community.

“We eventually had to close the gates at around 4.45 pm because the crowd was reaching capacity in the rugby field; almost 17,500 people,” she said, adding, “This year was a real crowd-pleaser.”