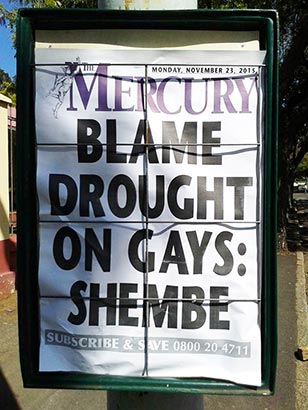 The gay and lesbian community has once again been attacked by a homophobic South African religious leader who’s now blaming the country’s drought on same-sex marriage.

The Mercury reported on Monday that Pastor Mduduzi Shembe, leader of the Ebuhleni division of the Shembe church, made the comments at a function in Nongoma in KwaZulu-Natal on the weekend.

Instead of pointing fingers at El Niño, wasteful water usage or leaking infrastructure, he railed against those who defied God, claiming that they had led to his vengeful response against South Africa.

Speaking in Zulu, Shembe allegedly said: “Men are now marrying men, and this is why we are currently facing this curse of hot sun and drought.”

A spokesperson for the church, Pastor Mhlaliseni Hlatshwayo, insisted that Shembe had not spoken out against gay people.

Confusingly, however, he then admitted that the church leader read out a passage about the importance of procreation, said those who don’t procreate are defying God, and “then made the example of men marrying other men.”

The event was attended by KZN Premier Senzo Mchunu and King Goodwill Zwelithini, who previously also made anti-gay comments.

The Durban Lesbian and Gay Community and Health Centre called for Shembe to hold a press conference to explain what he meant. It also said that it will lodge a complaint with the SA Human Rights Commission.

In August, the then-mayor of the Umzinyathi District in KZN said that gay men are responsible for spreading HIV and vowed to “clamp down” on homosexuality.

It’s also not the first time that the LGBT community has been blamed for natural disasters.

In March, a Port Elizabeth pastor claimed that the fires that had devastated Cape Town at the time were due to God’s fury at it being a “gay city.”

In 2013, Western Cape Pastor Oscar Bougardt claimed that Oscar Pistorius killing his girlfriend Reeva Steenkamp was a curse from God for him “openly supporting homosexuals.”

The previous year, Pastor Errol Naidoo said that gays and lesbians had created a “culture of death” that led to the Marikana Massacre.

LGBT people have also been blamed for the 2014 outbreak of the Ebola virus in Liberia, the Boston Marathon bombings and even the biblical floods.