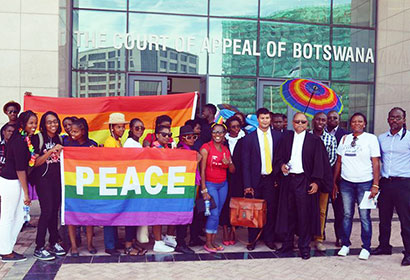 Botswana’s lesbian and gay group has appeared in the Gaborone High Court of Appeal to defend its constitutional right to exist as a legal entity.

On Friday, lawyers for Lesbians, Gays and Bisexuals of Botswana (LEGABIBO) asked a panel of five judges to not overturn a November 2014 ruling ordering the government to resister the organisation.

The authorities have refused to recognise the group as an NGO and appealed the earlier ruling.

Dozens of LEGABIBO supporters attended the hearing and gathered outside the court, holding up rainbow flags and placards with messages such as, “Hate is a crime”, “Silent but not mute,” and, “We are queer, we are here, we are Batswana.”

Representing the organisation, Dick Bayford argued that the Constitution of Botswana incorporates the protection of every person, regardless of their sexuality, without exclusion.

According to a report by LEGABIBO, he insisted that freedom of association is a right of every Botswana citizen, including homosexuals.

Bayford also pointed out that in 2010 the government amended the employment act to ban discrimination on the basis of sexual orientation in the workplace, indicating that the law already provides some recognition for LGBT equality.

During the hearing, the court heard arguments on the issue of public morality and if it is legal to lobby for the changing of this morality. It was noted that the Constitution of Botswana does not mention public morality. 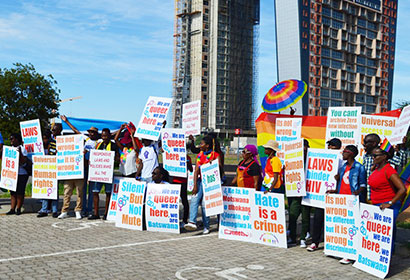 Botswana’s Attorney General claims that LEGABIBO does not have to be registered because the constitution does not explicitly recognise homosexuals as a group protected from discrimination.

The Attorney General also argues that the group could be used for an “unlawful purpose” that is “prejudicial to or incompatible with peace, welfare or good order in Botswana” and that registering an LGBT organisation would popularise acts criminalised in terms of the Penal Code.

The court will announce its decision at a date still to be made public.