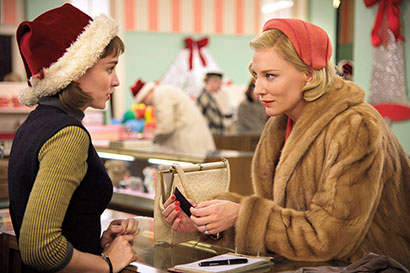 Todd Haynes adapts the Patricia Highsmith novel The Price of Salt for the big screen in the visually beautiful and meticulously directed Carol.

Similar to Haynes’ Far from Heaven (2002), which also featured a love story that was socially prohibited back in the 1950s, Carol focuses on an affair between an affluent married woman Carol Aird (Blanchett) and a young shop assistant, Therese Belivet, wonderfully played by Mara.

Blanchett brings a nuanced perspective to the role of Carol, a strong willed woman whose sexual desires for the same sex are severely limited by the narrow social attitudes of patriarchal America.

This is mirrored in the attitude of her affronted soon-to-be ex-husband Harge Aird (Kyle Chandler), who, typically of the time, views his wife and daughter as properties that need to be possessed.

Carol has to be viewed through the long struggle for LGBT rights, now more widely enjoyed in the US, which wasn’t the case some sixty years ago. Like Ang Lee’s Brokeback Mountain (2005), it depicts a socially taboo romance that affects not only the lovers involved but also their respective partners.

Therese’s suitor, played by Jake Lacy, is mystified as to why Therese is constantly rebuffing his advances. Carol’s situation, however, is more complex as she is married with a husband and a little daughter, which really speaks to the emotional pull of the film.

In fact, it’s the peripheral characters’ conservative viewpoints on morality which frame this tender and beautifully constructed love affair, characterised by Martinis and cigarettes. 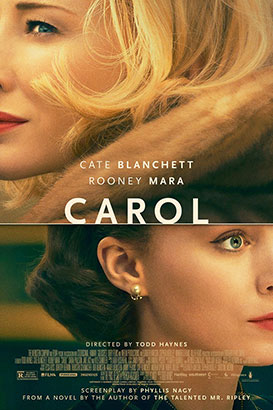 As Carol and Therese embark on a cross-country jaunt from New York to Chicago, their travels reflect their own emotional and sexual journeys and they realise how deeply they have fallen for each other, despite the consequences.

Through their initial encounter in a swanky New York department store, in which Therese persuades Carol to buy a train set rather than a doll for her daughter as a Christmas present, Haynes makes a point about the typical gender socialisation of children and how sexuality itself is a social construct.

Carol has generated a lot of critical acclaim because Blanchett and Mara both have the acting abilities to pull off such nuanced and complex performances, especially in the hands of a brilliant director like Haynes.

After his stunning mini-series Mildred Pierce (2011) and earlier films Far From Heaven and I’m Not There (2007), Haynes is a director at the peak of his creative powers.

Viewers who enjoy a mature adult drama should definitely watch Carol, a film that does not resort to explicit nudity or shock value but explores an extraordinary love affair during an exceptionally conservative era of American history.