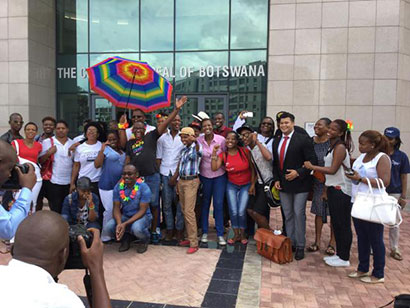 LEGABIBO members celebrate outside the court

LGBTI activists in Botswana have hailed yesterday’s “groundbreaking” court judgement upholding LGBTI equality and the right to freedom of association.

On Wednesday, a full bench of the Court of Appeal of Botswana ordered the government to register the organisation Lesbians, Gays and Bisexuals of Botswana (LEGABIBO) as a society in terms of the Societies Act.

Whilst activists gathered at the court in Gaborone to hear the judgement, supporters throughout the Southern Africa region posted messages of encouragement on social media.

The court ultimately dismissed claims by the government that recognising the organisation would lead to its members breaking the laws.

“That concern or reason for refusal was irrational on the evidence before us,” said Court of Appeal President Justice Ian Kirby.

The court ruled that the government’s continued refusal to register the group as an NGO was unconstitutional and said that LEGABIBO’s aims of promoting the human rights of LGBTI people and advocating for law reform were lawful.

Caine Youngman, LEGABIBO Advocacy and Awareness Officer, who’s been a part of the registration process from the beginning, commented that, “The win gives us hope, faith and belief in Botswana’s legal system. It has been a very long and exhausting 11 years since we first started the journey to have our organisation registered.”

LEGABIBO was formed in 1998. The Botswana government was first ordered to register the organisation in a November 2014 court ruling but it appealed the decision.

“This judgment is one of the many occurrences in Botswana where democracy has come to play, the courts are protecting minority rights and giving a voice to the LGBTI community,” said Anna Mmolai-Chalmers, LEGABIBO Coordinator at BONELA (Botswana Network on Ethics, Law and HIV/AIDS).

BONELA’s Executive Director, Cindy Kelemi added: “There is a lot that still has to be done to ensure promotion and protection of the human rights of the LGBTI persons and Parliament as the legislative arm of government is responsible for making laws which will protect LGBTI persons from discrimination, stigma and abuse.”

“The judgment emphasises the importance of the fundamental right of individuals to freely associate,” said Tashwill Esterhuizen, SALC’s Sexual Minority Rights programme lawyer. “The ability to share opinions in a collective manner and to campaign for human rights is important and all governments have a duty to protect the right to freedom of association.”