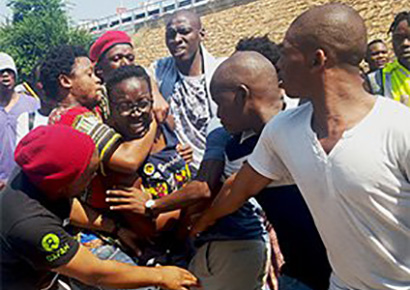 There’s growing tension within the #FeesMustFall (FMF) movement amid claims that some of its members are homophobic and anti-feminist.

News24 reports that at a fees protest at Wits University this week, a group of feminists and “queer persons” clashed with other demonstrators linked to the EFF and the Pan Africanist Student Movement of Azania.

The incident turned violent with pictures being posted on social media of a number of men wrestling with two women.

One of the men involved was identified as Chumani Maxwele‚ a key figure behind the Rhodes Must Fall campaign at the University of Cape Town (UCT). Maxwele was accused of choking one of the women and using anti-LGBT slurs like “sthabane” in the incident.

One of the women involved, Honourable Spigga (@TeaJay_001), said that Maxwele “tried to remove” her “to beat me off camera‚ which he then did…”

The RMF‏ Twitter account distanced itself from Maxwele, tweeting: “He does not represent us. One of our pillars is Black feminism – a violent misogynist cannot be called a Fallist.”

LGBT+ members of the FMF movement say that while they were instrumental in its launch they are now being excluded by male, patriarchal, homophobic and transphobic members who have other political agendas.

Honourable Spigga tweeted: “Last year, put my body on the line for #FMF. This year, the patriarchs said this revolution isnt for bodies like min.” 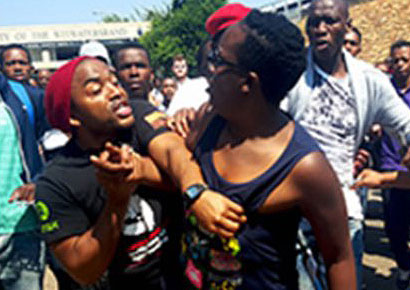 The Wits SRC condemned the violent incident on Twitter. It said that recent meetings that did not include “all vital groups & student governance structures at Wits” were “evidence of the patriarchal erasure of transgender & black feminist voices who have been instrumental #Wits.”

Activate, the Wits LGBT+ student campus groups, also slammed “the exclusionary nature that queer bodies face in protest movements. Intersectionality is something that cannot be ignored.”

Maxwele later denied that he had been violent. He told 702’s Redi Tlhabi: “I am against violence against women and I have never beaten any women in the movement.”

He also insisted that, “as a collective we have no position that says exclude women who are queer, exclude gay people or anyone based on their sexual orientation.”

Last month, members of UCT’s Trans Collective student group vandalised photographs and held a naked protest at an exhibition documenting the FMF movement, claiming that the role of trans activists in FMF had been excluded in the images displayed.