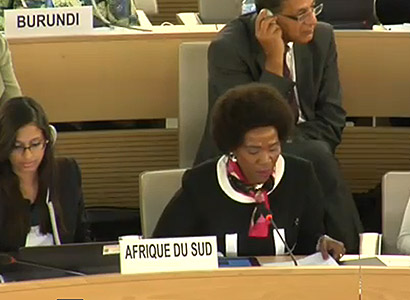 South Africa shocked LGBTI activists around the world last week when it refused to support a landmark resolution on LGBTI rights at the UN Human Rights Council (UNHRC) in Geneva.

On Thursday, the council voted to adopt a resolution on the “Protection Against Violence and Discrimination Based on Sexual Orientation and Gender Identity (SOGI)” that establishes the position of an Independent Expert on SOGI.

The expert will be tasked over three years with, among other things, assessing implementation of international human rights law, identifying best practices and gaps, raising awareness of SOGI-based violence and discrimination, engaging in dialogue and consultation with states and other stakeholders, technical assistance, and capacity-building and cooperation.

Remarkably, South Africa – which previously led on SOGI resolutions since 2011 – chose to abstain in the vote. In an angry (in diplomatic terms) statement, South Africa’s ambassador Nozipho Mxakato-Diseko lashed out at the countries that sponsored the resolution: Argentina, Brazil, Chile, Colombia, Costa Rica, Mexico and Uruguay.

She accused them of being “arrogant and confrontational”, of “grandstanding, recklessness, brinkmanship and point scoring” and of adding “divisive dimensions” and “unnecessary acrimony” to the council.

Mxakato-Diseko justified this position by suggesting that apartheid had been defeated through “maximum consensus” and not confrontation. She said that the road to LGBTI equality should be a slow one in which all parties “walk together” including “countries that have challenges with this issue”.

Ironically, it was Mxakato-Diseko’s tone that appeared belligerent and arrogant, lecturing the council on how it should take its time on the rights of LGBTI people and dismissing the more than 600 organisations from around the world that supported the resolution. 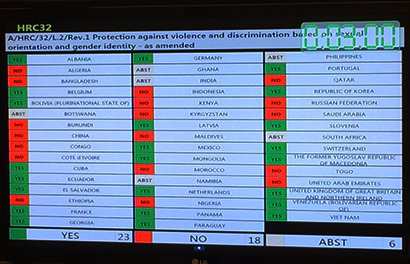 Monica Tabengwa from Pan Africa ILGA told Mambaonline that while the organisation sees the passing of the resolution as a victory, it is “very disappointed” with South Africa’s stance at the UNHRC.

“Since 2011 they have provided essential leadership in Africa and they are turning around and they are not being there for us,” she said.

Tabengwa believes that while South Africa supports the principle of eradicating violence against LGBTI people, backing the creation of the Independent Expert was a step too far that would alienate it from other African countries.

“It would seem that South Africa has suffered a lot backlash when they led the first SOGI resolution, particularly from Africa, which is where their trading block is more situated. It was a trade off with that group and it means giving up on the aspirations of its own citizens. They [South Africa] betrayed themselves,” she said.

“I feel that South Africa needs to account not only to the LGBTI community but also to other communities [for its stance]. It never ends with one minority group – there will be others. This needs to be curbed and addressed now so that they don’t behave in this unethical manner,” Tabengwa added.

“For South Africa, respect for the promotion, protection and fulfilment of human rights and fundamental freedoms as enshrined in our Constitution constitutes a critical pillar of our foreign policy. We believe that no persons should be subjected to discrimination or violence on any ground, including on the basis of sexual orientation. Guided by this conviction South Africa tabled the original resolution on the SOGI and the LGBTI issue in 2011. Our approach on the issue of protection against violence and discrimination of LGBTI persons was and remains to focus on issues that will draw maximum unity at this council and carry even countries that have challenges with this issue.

“How the current sponsors have sought to build on the South African initiative of 2011 has added divisive dimensions and created unnecessary acrimony in this council. We learned from our struggle against apartheid that if we are clear about the end goal, which for us is the end of violence and discrimination against the LGBTI persons, a better approach is building maximum consensus. This could have been achieved would it not have been for the arrogant and confrontational approach adopted.

“Mr President, there is an African proverb that says, ‘If you want to walk fast, then walk alone. If you want to walk far, walk together with others.’ South Africa remains firmly committed to investing all its resources to ensuring that violence and discrimination against LGBTI persons is eradicated, leaving no one behind.

“Grandstanding, recklessness, brinkmanship and point scoring will not take us anywhere. Lives are at stake. It is for these reasons that while we have supported those parts of this resolution which focus primarily on ending violence and discrimination against LGBTI persons, South Africa cannot support this resolution as its stands and will therefore abstain.”