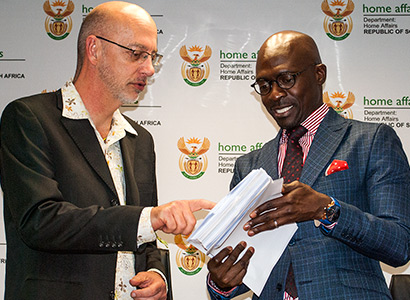 Home Affairs Minister Malusi Gigaba has accepted a massive petition from the LGBTI community and says he’ll do all he can to stop or limit ‘kill-the gays’ pastor Steven Anderson’s visit.

On Monday, Gigaba met with organisations such as GaySA Radio, OUT LGBT Well-being and FEW (Forum for the Empowerment of Women).

Led by GaySA Radio Station Manager, Hendrik Baird, who initiated the campaign against the gay hate pastor, the activists urged the minister to block the preacher’s visit.

The minister was also presented with a petition calling for action from Home Affairs, signed by over 60,000 people from all over the world.

Gigaba told journalists: “We would never encourage any individual to come from their own country to promote such backward and savage views in our country, particularly under religious pretexts; because religious people should be more active in promoting tolerance.”

He nevertheless stated that he could not yet commit to stopping the pastor from entering the country. Gigaba insisted that to use the Immigration Act to either declare Anderson an undesirable person or someone advocating “social violence” he would need more ammunition.

Therefore, Gigaba said, he had asked the activists to compile a dossier with supporting information to offer “hard facts” as to why he should prohibit Anderson.

GaySA Radio’s attorney, Coenie Kukkuk, explained that the minister “did not have all the information that we have in terms of Pastor Anderson at his disposal. We have undertaken to provide it to the minister this week”.

Gigaba continued: “We will consider very carefully the dossier presented to us and based on the dossier we will take the relevant decision to ensure that homophobes either are not allowed in South Africa or if they enter the country, they enter with very stringent restrictions as to what they can do or say.”

This included issuing Anderson with a warning on arrival “that should you anywhere in the country advocate for [anything] that is unlawful in terms of South African law or the Constitution you will be in breach, as a result of which we will have to detain you or charge you”.

Gigaba also suggested that Anderson could be stopped from preaching in the country unless he applied for and received a work visa. If he tried to preach without this, “we would have to take action in that regard”.

“If he was coming as a tourist and he is going to Kruger National Park or to swim at the beach, he can go and do that, but once he opens his mouth and utters words which we regard as hate speech in South Africa then we are obliged to take action and make sure that he is prosecuted for transgressing our laws.”

Baird told journalists: “We are absolutely pleased that this issue is being taken very seriously, that a lot of thought is going into this and that the minister is really applying his mind to it and giving us the opportunity to bring the relevant evidence to show that this man is doing stuff that should not be allowed in South Africa.”

“We are all on the same page,” added Kukkuk. “We do not differ in any way with the minister, on legal grounds or on moral grounds.”

“We are confident that the minister will come to the right decision and support the LGBTI community,” he said.

Anderson, who heads up the Arizona-based Faithful Word Baptist Church, is set to visit Johannesburg in a missionary style excursion on 18 September to “win souls” for his hateful cause.

He has stated that killing gay people would free the world from the AIDS epidemic. Most recently, he praised the Orlando massacre as “good news” because “there’s 50 less paedophiles in this world”. Anderson has continued to preach that governments must execute gay people.