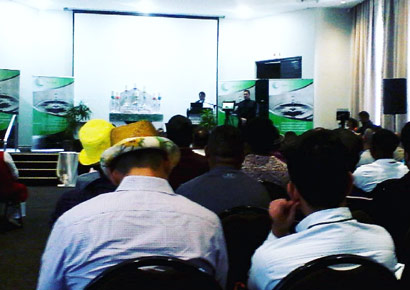 The opening day of the retreat

The conference, which runs from the 14th to the 21st of October, will see a host of organisations, academics, individuals and institutes from around the world gathering to address issues facing LGBT+ Muslims.

“This year’s retreat will focus on movement building,” said the group’s Latheem Nair. “It is the belief of The Inner Circle (TIC) that no organisation can work in isolation. The sharing of information, skills and best practices is the cornerstone of creating solidarity.”

Around 80% of delegates at the conference are international while 20% are local. Participants will be able to engage with issues that speak to their particular context and, through networking, apply knowledge and skills gained from workshops, plenaries and sessions.

“Some of the tracks being covered this year will focus on transgender health and education which will look specifically at accessing educational resources, advocacy and sifting mind sets; while the Program for the Development of Youth will look at developing spiritual leadership amongst Muslim youth,” said Nair.

“The International Gender Forum will address ways of narrowing the gap between the struggles of women and queer people resulting from patriarchal systems; and the Islamic Peace Circles will focus on the creation of safe spaces in various provinces,” he added.

Previous retreats have produced networks such as the Global Queer Muslim Network. Its member groups work within their respective contexts to create change for queer Muslims within the Muslim community.

TIC itself has been in existence for 20 years. It was founded and is directed by Imam Muhsin Hendricks, the first Imam in South Africa to publicly come out as gay.

Evolving from a support group of thirty odd gay Muslims, TIC has since grown to offer a service delivery and advocacy role around reconciling sexual orientation and gender identity within Islam.

Nair told Mambaonline that while South Africa’s constitution legally protects queer Muslims, “due to cultural and religious orthodoxy, queer Muslims are more than often left to sacrifice one identity for another”.

He said that the organisation is not yet formally recognised by official Muslim institutes, such the Muslim Judicial Council, but that there has been some progress. “Due to TIC’s constant engagement on Muslim platforms and through the TIC produced documentary FITRAH, the Muslim community has become more relaxed around TIC’s existence and the work that we do.”

When asked which is the biggest misconception within the Muslim community about queer people and issues, Nair responded that it is the belief that the story of Sodom and Gomorrah spoke of homosexuality. “Historical and contextual evidence indicates that the situation with these cities was a case of male rape as opposed to men loving men,” he explained.

The retreat is being live streamed via YouTube. Details can be found on the TIC Facebook page.