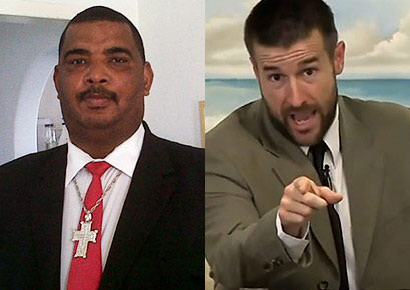 According to Daily Voice, Bougardt recently returned from a two week jaunt to visit Anderson in Arizona. He said that he plans to share DVDs of Anderson’s bigoted sermons, which he brought back, with other local churches.

The Cape Flats pastor also told the newspaper that he is in discussions to buy a building in Eerste River to house a South African branch of Anderson’s Faithful Word Baptist Church. The church could open its doors as soon as January.

Anderson has been determined to launch a southern African branch of his church. He was, however, blocked from entering South Africa and deported from Botswana over his calls to have gay people executed and for applauding the Orlando Massacre as “good news”. An attempt to open a church in Malawi also appears to have been foiled.

With Bougardt’s help, however, his plan may finally be realised. “We will be buying and not renting [the building], so no one can do anything about the plans ahead,” said Bougardt, who is also known for his homophobic hate speech.

“We will not only be touching on issues about homosexuality but all issues which the Bible speaks of.” he continued.

“So I want to let the people know here, this is about spreading Christianity and there is no stopping that, we are in a country of freedom of religion.”

Bougardt also revealed that he was “a victim of homosexual abuse, when my tyres were slashed outside my home”. 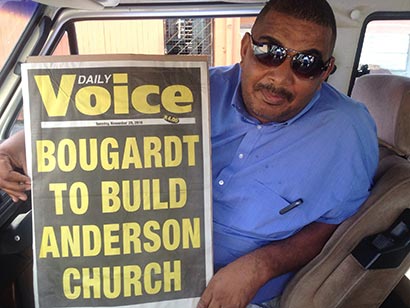 He went on to address World Aids Day by blaming same-sex relationships for the high rate of HIV infections. “South Africa wants to be free from HIV/AIDS by 2030. Only way to do this is to turn back to God’s natural way, man and woman relationships,” he insisted.

“Governments are slowly but surely killing people by allowing these sick same sex relationships,” he added.

In an August 2014 Equality Court settlement order, Bougardt was “interdicted from publishing statements that are discriminatory or incite hatred or harm on the grounds of sexual orientation”.

He defiantly contravened the order and went on to make more hateful anti-LGBT statements on Mambaonline. In September 24, 2015, for example, he wrote: “We need Isis to come to countries who are homosexual friendly. Isis. Please come rid South Africa of homosexual curse.”

Complaints against Bougard for these comments have been laid with the SA Human Rights Commission.